The current Mosquito Road Bridge was built in 1939. However, the stone towers are likely from the previous bridge, which was built in 1867. According to a history of the region on the Sierra Nevada Geo-tourism Website the earlier bridge had no railing and was suspended from telephone wires (more likely telegraph wires in 1867), which made for a lively ride. 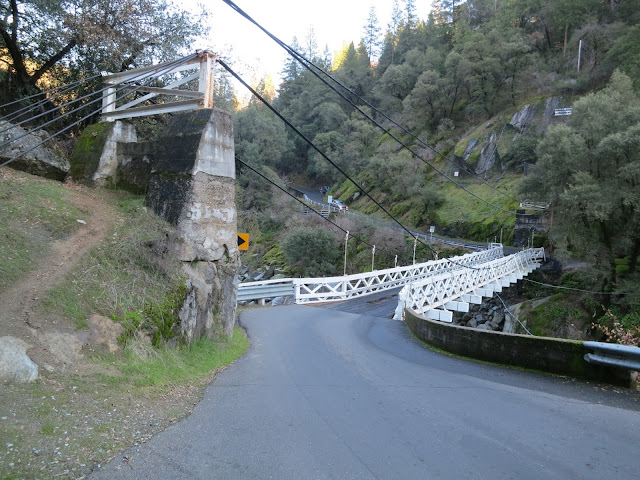 The current bridge has a 201 ft main span and a width of only 8.9 ft and so cars on opposite sides of the bridge have to take turns crossing. The stone towers are topped with steel frames that act as saddles for the suspension cables, which are anchored into the hills behind the towers. There are a variety of other lines and cables suspended over the river, which detracts slightly from the attractiveness of the bridge.

El Dorado County, California's Bridges: Mosquito Road Bridge across the South Fork of the American River (2) by Mark Yashinsky is licensed under a Creative Commons Attribution-NonCommercial-ShareAlike 3.0 United States License.
Posted by Mark Yashinsky at 9:00 AM