Niigata Japan's Bridges: Route 8 Bridge across the U River (2)

Looking upstream at the Highway 8 Bridge over the U River. Although the bridge had little damage there was a lot of damage all around the bridge. In the photo below we see the statuary at a nearby shop fallen over. There's a geologist who has made a name for himself (a name I can't recall) by calibrating the ground motion during earthquakes from the movement of nearby rocks.

The Shell Gas Station (see the top photo and the photo below) was closed, probably because the underground gas tank began floating to the surface due to liquefaction of the surrounding soil. All of this is evidence that bridges are inherently stable and hard to damage by earthquakes. 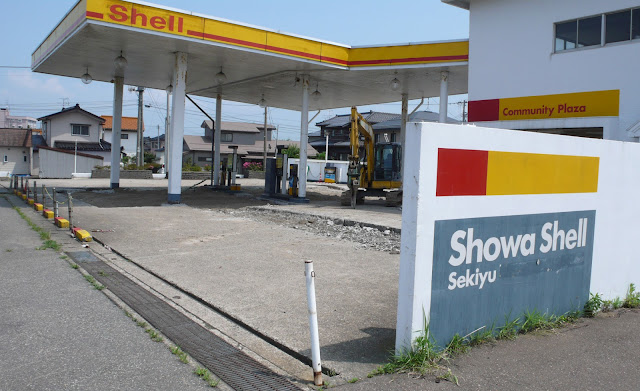 Niigata Japan's Bridges: Route 8 Bridge across the U River (2) by Mark Yashinsky is licensed under a Creative Commons Attribution-NonCommercial-ShareAlike 3.0 United States License.
Posted by Mark Yashinsky at 1:02 PM