We are rapidly approaching the eastern end of the Onagi Canal. In the background is the confluence of the Kyu Nakagawa and the Onagigawa. This is also the setting for another woodblock print by Hiroshige.


One Hundred Famous Views of Edo #60: Mouth of the Naka River shows the confluence of the Nakagawa and the Onagigawa.  The print provides the same view as my photo (only from higher up). Hiroshige is looking east from the Onagigawa at the Nakagawa (the Shinkawa in the distance no longer exists). The spot on the lower left is called a 'bansho' or the point where the boats could dock and hence the name of the Bansho Bridge.


If I were to continue traveling around Kanto photographing bridges, we would eventually see the location of most of the 100 (actually 116) famous views of Edo (only 150 years later). 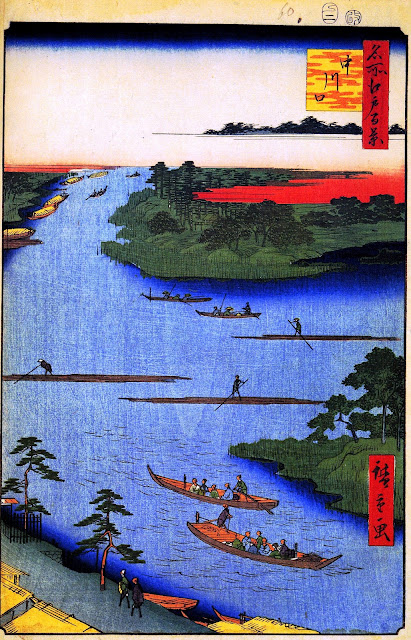 Tokyo, Japan's Bridges: Bansho Bridge (番所橋) across the Onagi Gawa by Mark Yashinsky is licensed under a Creative Commons Attribution-NonCommercial-ShareAlike 3.0 United States License.
Posted by Mark Yashinsky at 9:00 AM