Ibaraki, Japan's Bridges: The Joban Expressway across the Nakagawa

There are three bridges that cross at this bend of the Nakagawa. We already looked at the utility bridge and at Kunita Bridge but the biggest structure is the Nakagawa Bridge carrying the Joban Expressway. It is made up of a three span and a four span frame and has stocky pier walls with hammerhead caps supporting a steel box girder superstructure. Unlike the Kunita Bridge, this bridge was considered an evacuation route, it was retrofitted before the 2011 earthquake, suffered no damage, and continued to carry traffic. 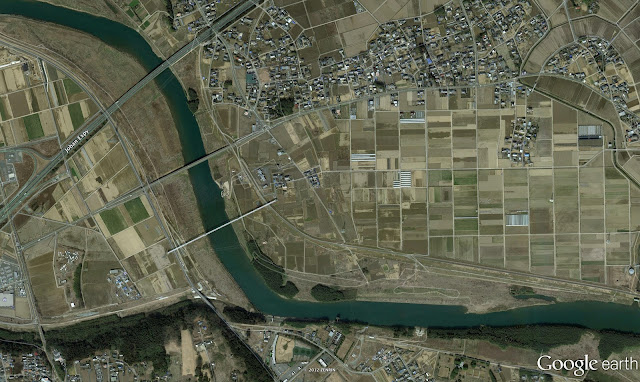 Ibaraki, Japan's Bridges: The Joban Expressway across the Nakagawa by Mark Yashinsky is licensed under a Creative Commons Attribution-NonCommercial-ShareAlike 3.0 United States License.
Posted by Mark Yashinsky at 9:00 AM