The Kunita Bridge is a six span double steel box girder bridge built in 1976 that carries Route 63 (between the utility bridge and the Joban Expressway) across the Naka River. The bridge sits on short and tall pier walls and the short pier walls were damaged during the earthquake. The damage was repaired by injecting epoxy grout into the smaller cracks and removing crumbled concrete and placing casings over the larger column damage. The bridge had moved tranversely during the earthquake and the expansion joint on the west side was replaced with a steel plate. Most of the steel bearings were damaged and so the girders were still sitting on steel blocks when we visited the bridge site. 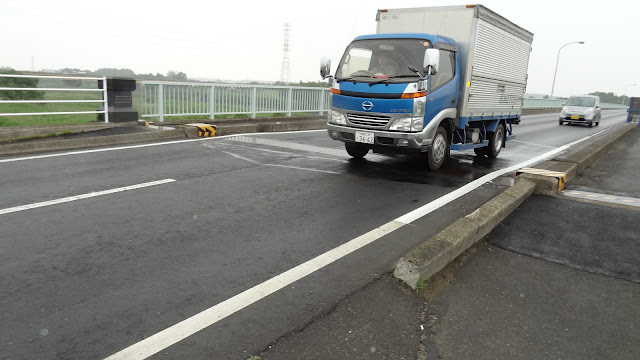 Ibaraki, Japan's Bridges: Kunita Bridge across the Nakagawa (1) by Mark Yashinsky is licensed under a Creative Commons Attribution-NonCommercial-ShareAlike 3.0 United States License.
Posted by Mark Yashinsky at 9:00 AM