The next bridge downstream is a continuation of the Metropolitan Expressway that was shown on my April 17th Blog. The elevated expressway follows the Sumida River for several miles, then turns at a canal, crosses the Arakawa, and connects to the Central Expressway along the east bank of the Arakawa (see Google Earth Photo below). In the photo above the exterior of the bridge is being covered up prior to repainting. 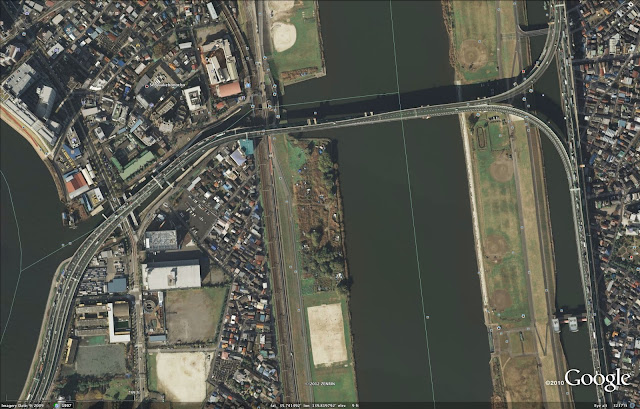 The two decks sit on outrigger bents that support the decks as they widen and then split into on and off ramps that connect to the two decks of the Central Expressway. This split is called the Horikiri Junction.

Tokyo, Japan's Bridges: Metropolitan Expressway across the Arakawa by Mark Yashinsky is licensed under a Creative Commons Attribution-NonCommercial-ShareAlike 3.0 United States License.
Posted by Mark Yashinsky at 9:00 AM