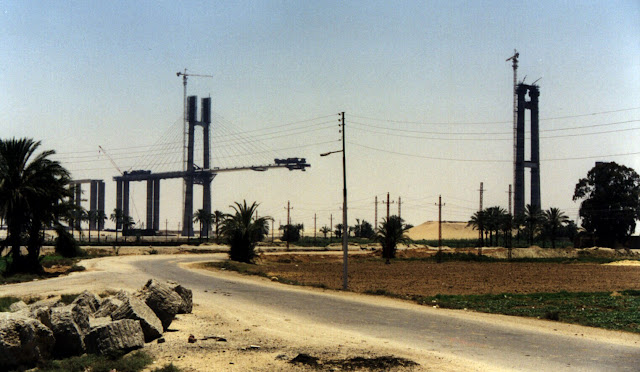 A slightly closer look at the Suez Canal Peace Bridge. We were staying in Cairo when some of my engineer friends took me to see this bridge. As we drove across the desert, we would sometimes see a lone man sitting on the side of the road beside a pyramid of melons.

We were riding in a new Mercedes, but it got a flat in the middle of the desert. The driver got out, jacked up the car, and changed the flat tire while we remained in air conditioned comfort. It must have been 120 degrees Fahrenheit outside.

I had just given a talk on earthquake design. I can't remember now if it was at Cairo University or at the bridge department, but I do remember being surprised to see more than half the engineers were women, all with their faces covered.

In order to get to the bridge, we had to take a ferry across the Suez Canal into the Sinai Peninsula. There was a long line of cars, but the driver just drove ahead and cut to the front of the line. We got onto the next ferry and arrived just in time for our tour.

The Israelis controlled the Sinai after fierce fighting in 1973 but they gave it back to the Egyptians for a kind of peace. For hundreds of years before that, it was controlled Turkey. We'll take a closer look this bridge tomorrow.