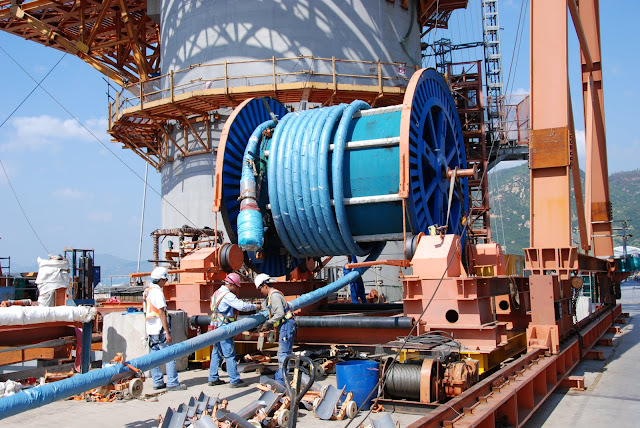 Another photo of the construction of Stonecutters Bridge. The tower on the east side of Rambler Channel sits on what was once Stonecutters Island (but is now part of the mainland). I wonder if there were thousands of stone cutters practicing their craft here 100 years ago?
In this photo they are removing one of the 224 cables from drums shipped from Nippon Steel at a fabrication plant in Shanghai. The longest cable is 670m (2,198ft) long and they have from 187 to 421 - 7mm high-strength galvanized wires. The cables (made up of parallel strands) were shipped to Hong Kong. The drums were lifted onto the deck and set into a device that slowly unrolls the heavy cable as workers spread it onto the deck.  A crane then lifts the cable where it is attached to the towers and then stressed from a gantry under the girders.
The lower three sets of cables are anchored into the reinforced concrete towers while the upper 25 sets of cables are installed into anchorage boxes in the steel portion of the towers. At the top of each tower, space was left for a tuned mass damper, should they be required to reduce vibrations.