Traveling to the east from Bridgeport we eventually reached the Purdon Bridge over the South Fork of the Yuba River. This structure is reputed to be the only half-through truss bridge in California. However, I seem to recall the Ponderosa Way Bridge and several other bridges had their decks supported at mid-height between the top and bottom chords. 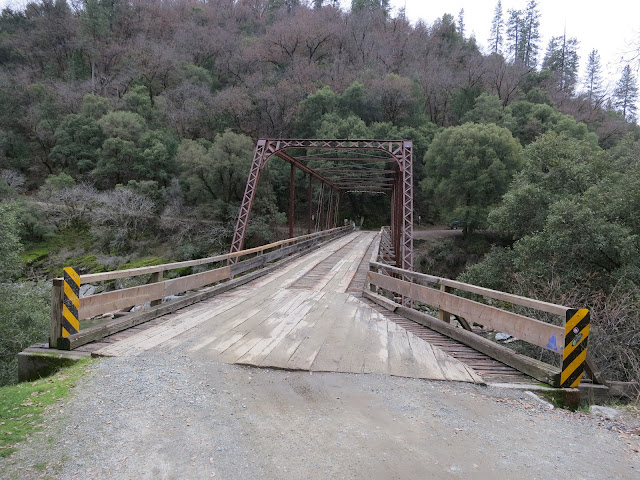 The Purdon Bridge is a pin-connected Pratt truss built by the Oakland-based Cotton Brothers in 1895, who were important builders of steel truss bridges in the late 19th and early 20th centuries. This bridge replaced several timber crossings that had been washed away in floods. It was a major link on the road from Nevada City to points north. Today it is road bridge and also part of a hiking trail through the South Yuba River State Park.

I wonder how much of the original bridge is still standing? The truss is authentic but the deck and railing appear to be recently constructed. Also, the bridge is supported on driven pipe piles, which I don't remember seeing on too many 19th century bridges. The portal frame is quite lovely, but the plaque on top is missing. However another plaque from 'E Clampus Vitus' is mounted on a rusted truss member.

We'll take a look under the bridge tomorrow. 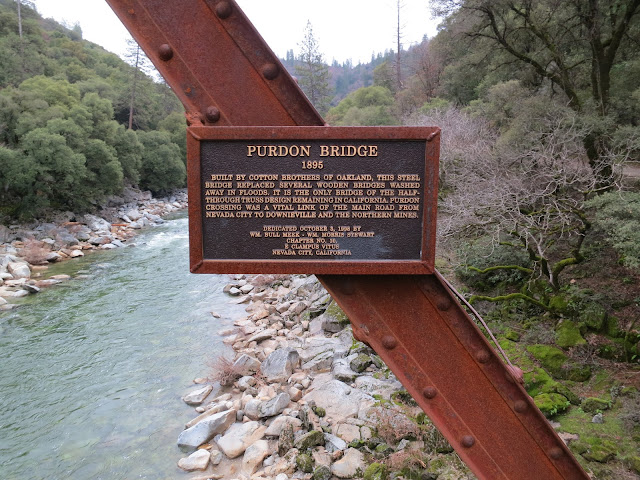 Nevada County, California Bridges: Purdon Bridge across the South Yuba River (1) by Mark Yashinsky is licensed under a Creative Commons Attribution-NonCommercial-ShareAlike 3.0 License.
Posted by Mark Yashinsky at 9:00 AM