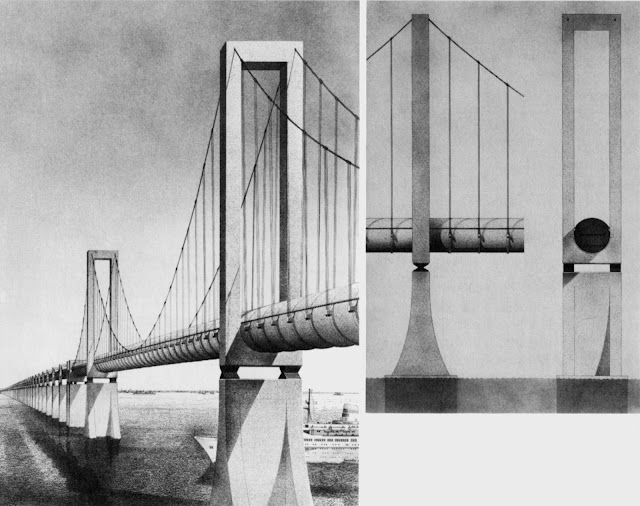 The most popular fantasy after 'bridges with buildings' in 'Unbuilt America,' (by Sly and Stone) are 'bridges with pipes.' If a building bridge represents the fantasy of watching travellers from the comfort of home than a pipe bridge represents the fantasy of travel through the birth canal. In the drawing above (from 'Design and the Environment' by Phyllis Kirby) a 'Pipeline for Autos,' from 1963 shows how vehicular protection can be provided in a cold and windy environment. It's an above ground tunnel composed of a cylindrical superstructure with piers and occasional towers for the substructure. 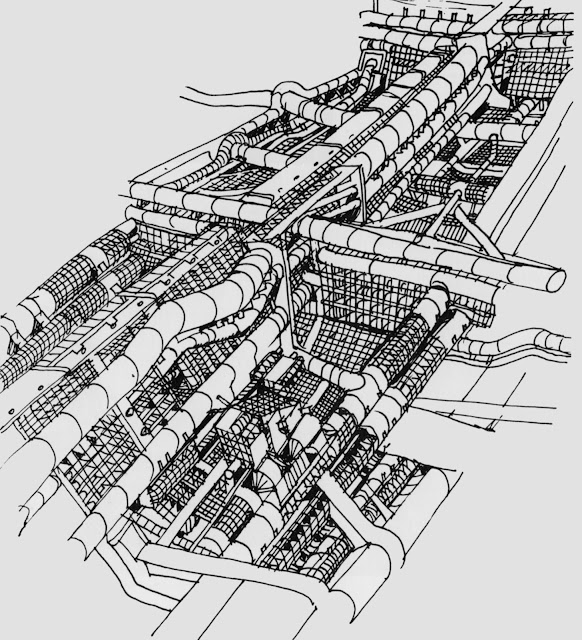 A variation on this theme is the 'Future Cities' by James Rossant (1973). In the above drawing his city resembles an organism with it's epidermis removed and it's circulatory system exposed. Bridges are just one of various pipelines carrying its circulatory systems through a city like an exposed anthill. The idea of communal living with minimal environmental degradation was a popular idea in Paolo Soleri's Arcosanti or in a megapolis like New York or Tokyo. The idea seems comforting, at least from this view high above the people's struggles.

Speaking of Soleri, almost all of his bridges are either tubular like the drawing above or partially exposed tubes like the Beast bridge we recently studied.  I wonder if in the future we will be protected from the sun, the air, and the weather in a completely sealed environment, riding along moving sidewalks and observing the outside through glass.
Posted by Mark Yashinsky at 9:00 AM