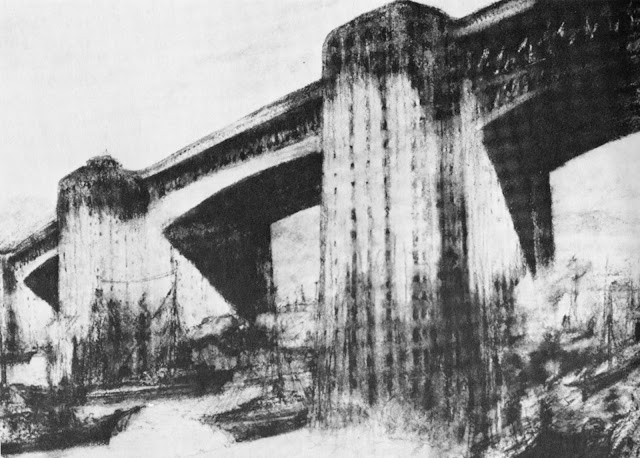 The book 'Unbuilt America' by Allison Sky and Melissa Stone illustrates a variety of futuristic fantasies for the United States. A recurring image is a building combined with a bridge. In the past, the wealthiest merchants build their businesses on bridges. However, I don't know if the same strategy would work today. When Louis Mullgardt visited San Francisco in the 1920s everyone was debating whether to build a bridge across the Bay. Mullgardt's unsolicited proposal (shown above) included giant buildings for the piers and a 24 lane bridge deck across the Bay. His expert use of charcoal made this futuristic study look more like a renaissance drawing. 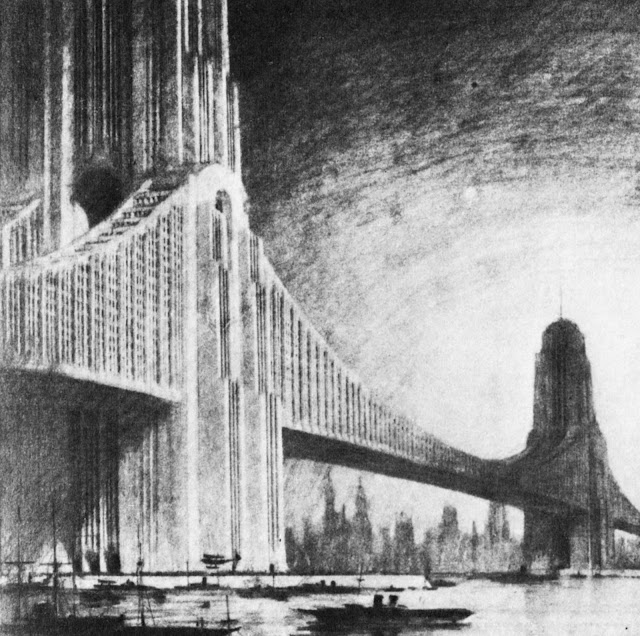 In Hugh Ferriss' drawing above (from 1929) apartment buildings were combined with a suspension bridge. Maybe it's the juxtaposition of a building facade on a bridge that causes a slight frisson of confusion and recognition.

If a suspension bridge can support buildings so can a truss bridge. The Big Four Bridge was a railroad bridge that was built in 1893 across the Ohio River between Louisville, Kentucky and Jeffersonville, Indiana. When the railroads abandoned the bridge several entrepreneurs suggested converting it into a mini-city with apartment buildings, restaurants, etc.. The composite photo/drawing by Arthur Foran in 1968 shows how he imagined it might look. However, the director of housing and building inspections eventually had the approaches removed as an eyesore. The idea of living on an old bridge reminds me of the William Gibson 'Sprawl Trilogy' that takes place on the Bay Bridge after it was damaged during the Loma Prieta earthquake and became home (he imagines) to thousands of squatters.
Posted by Mark Yashinsky at 8:45 AM