This week's bridge crosses over the Middle Fork of the Feather River. The water level is so low now that the bridge looks like it did when it was first built. It's a suspension bridge, which is one of the easier long span bridges to build. Once you drape the cables over the towers (and anchor them) you can just work from each end hanging the superstructure until they meet in the middle. 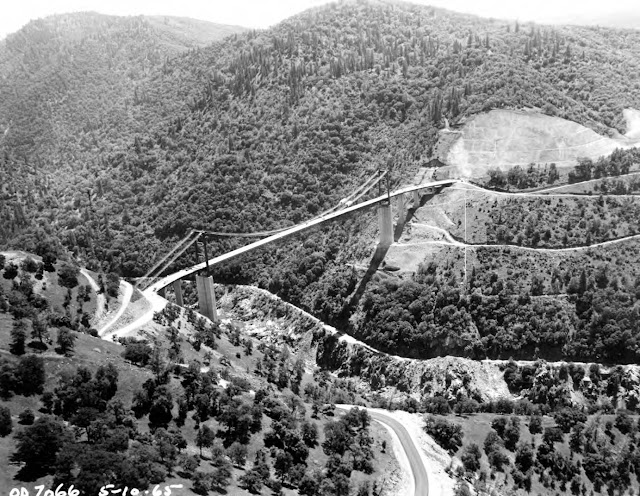 Chico State University has archived many photos that were taken during construction of the bridge and the dam. It's surprising how many long span bridges were designed and built during the period when the dams were being constructed. Sepulveda Dam was completed by the USACE in 1941, Shasta Dam was built by the USBR in 1945, Oroville Dam was built by the CDWR in 1965, etc. Who were all these bridge engineers?  There seems to be a boom period for different places when money is available and amazing infrastructure is created. 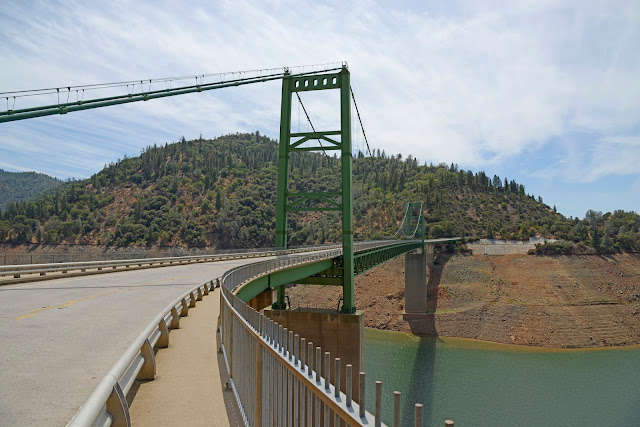 This week's bridge has several names. It's called the Bidwell Bar Bridge because it replaced an old bridge by that name (that we'll look at next week). It's called the Lake Oroville Bridge because its the most impressive of the bridges over Lake Oroville. Caltrans calls it the Middle Fork of the Feather River Bridge (12 0188) after the obstacle that it crosses. It carries the Olive Highway, which is also called the Oroville-Quincy Highway and it's officially called California Route 162. The main span is 1108 ft long and the entire bridge is 1793 ft long. The roadway is 28 ft wide with sidewalks on both sides of the roadway. It's an interesting bridge because it is on a horizontal curve with the suspension cables anchored to the side of the deck. Note how there are no back stays on the bridge. Instead, there are concrete piers to support the back spans on both ends of the bridge. Eric Sakowski writes that it's the highest reservoir bridge in the US. The towers are 350 ft tall and were built about 300 ft above the bottom of the river.

Butte County, California Bridges: Route 162 Bridge across the Middle Fork of the Feather River by Mark Yashinsky is licensed under a Creative Commons Attribution-NonCommercial-NoDerivatives 4.0 International License.
Posted by Mark Yashinsky at 10:15 AM