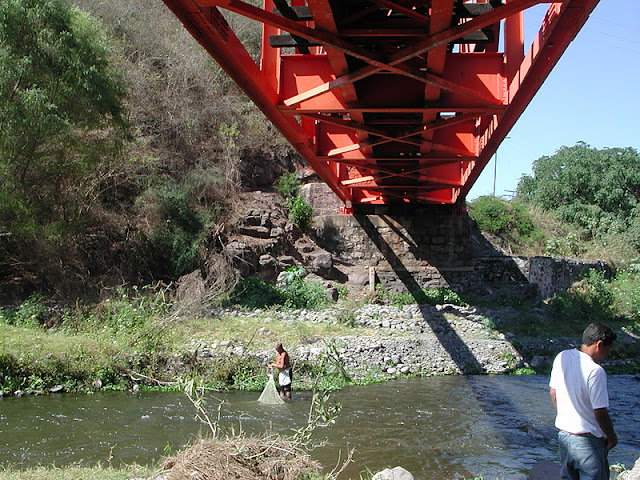 Another view of the railroad bridge near Coquimatlan. This through steel truss is carried by big rocker bearings. Note the man under the bridge throwing a fishing net into the river.

Today I watched the film In the Pit by Juan Carlos Rulfo, which was recommended by Norrin in a comment to this blog. The film follows laborers and ironworkers building the elevated portion (the Second Deck) of Mexico City's Periferico Freeway.

The film referred to a Mexican legend that the devil requires a human life during the construction of every bridge to keep it standing.  Rulfo had a nice shot at the end of the film from a helicopter of mile after mile of freeway. It really gave a sense of how much work was required to build about 20 km of elevated expressway. The movie had lots of moments of humor, sweetness, frustration, and anger expressed by the construction workers that made the film engrossing. I think we're fortunate that the owners gave Rulfo access to the construction site.

You can rent the movie (it's available on Netflix) or you can look at photos of the freeway at skyscrapercity on the Internet.