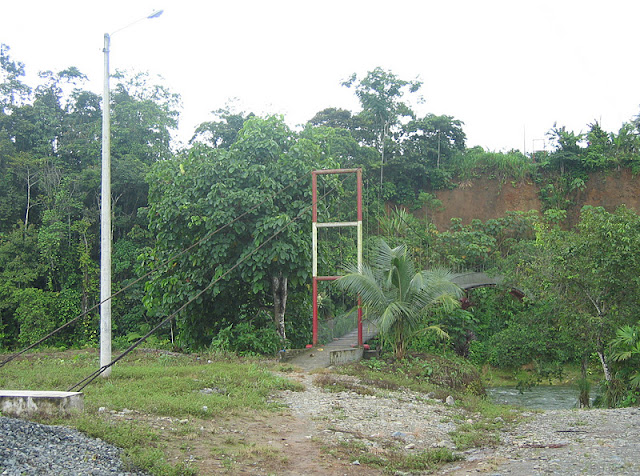 This bridge is a somewhat unusual design for Walter because it has one tower 40 meters above the other on a cliff on the other side of the river.

Walter began building bridges with Toni Ruttimann who had a strong desire to help the poor. Because neither Walter nor Toni were engineers, they came up with a very safe bridge design. As long as they maintained some simple geometric relationships and kept the span length below about 100 meters, they knew their bridges would be very safe. The towers were pinned and the force on each side of the tower was kept equal by making the angle of the cable the same on each side of each tower.

I called this bridge Puente Rio Baba but looking at my notes, I found that Walter called it Puente Santa Marianita, which is the name of the community that helped build the bridge. This bridge is in the country of Ecuador, the province of Pichincha, the canton of Santo Domingo, the parish of El Esfuerzo, and the community of Santa Marianita.

The Catholic Church plays a large role in rural life in Ecuador. We were sometimes accompanied by a priest to visit a bridge and then we would drive slowly because so many people would run out of their house to say hello or ask something from the priest.

We'll take another look at this bridge tomorrow.