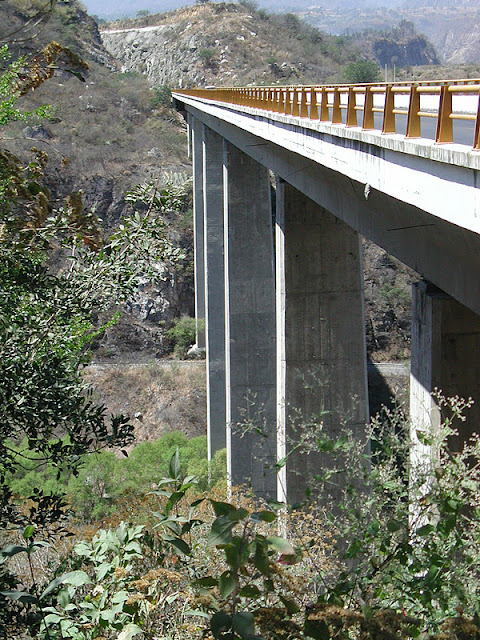 Another incrementally-launched post-tensioned box girder bridge built in 1989 by Mexpresa on Route 54D in Colima Mexico.

The bridge seems to be in pretty good shape, although I wonder why those tendons/rebars are sticking out of the side of the box?

I imagine that the columns were segmentally constructed. A certain length of column forms were put together, the concrete is poured and cured, and then the forms were raised and additional concrete poured above the cold joint. This process was repeated until the column was completed.

I wonder if the entire rebar cage is first assembled.  It may be difficult to assemble and support a 250 ft tall rebar cage while the concrete is poured, but it's certainly possible.

The box girder superstructure was assembled just like the superstructure on Puente Atenquique II. The concrete was poured in units between a quarter to a half of the span length and then pushed out from the abutment. A steel nose was attached at the end to provide support from the next pier. The hydraulic jack must be well anchored to be able to push a bridge all the way to the other abutment. I think the development of hydraulic jacks has 'revolutionized' the art and practice of bridge engineering.