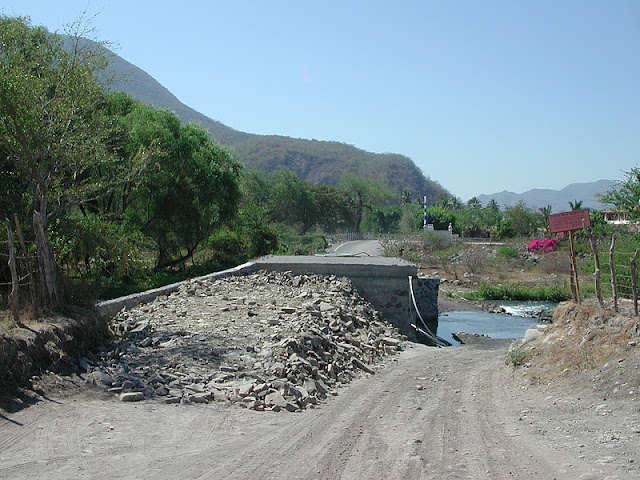 Near the City of Coquimatlan I came upon a bridge being built. There was a sign at the site that said, 'Excuse the annoyance. Coquimatlan City Hall is building this bridge with funds from SEDESOL (the Social Programs Ministry) and the municipality with a $284,518 investment.'

The apology was warranted because drivers had to go around the bridge and ford the river. The cost (in Mexican Pesos) is surprisingly cheap, about $22,000 US which is about $25 US per square foot of deck!

The Puente de la Ciudad de Coquimatlan is a single span reinforced concrete slab bridge on stone masonry abutments. There are several interesting aspects to this simple bridge. There are no bearings, just a cold joint between the slab and the abutments. Rubble was placed at the embankments behind the abutments rather than well-compacted backfill. The stones for the abutments look like they were placed by hand (there are no obvious signs that the stones and concrete were poured into forms). Note the plastic tubing that goes through the deck. Perhaps those are for the optical and electrical cables the bridge will carry.

hey i actually worked there wen that bridge was built .i lived in the town next door (jala)
canta_recio333@yahoo.com.mx