Looking north at the Atlantic Boulevard Bridge (53C0252) across the Los Angeles River in the City of Vernon. Atlantic Boulevard crosses the Los Angeles River again a few miles south of here in Compton. Today's bridge is a seven span deck arch on pier walls that was built in 1931. A through girder railroad bridge on four wide pier walls with cutwaters can be seen under its arches. Beyond the railroad bridge is the 13 span steel girder South Downey Road Bridge (53C0576). The buildings of downtown Los Angeles can be seen in the distance. 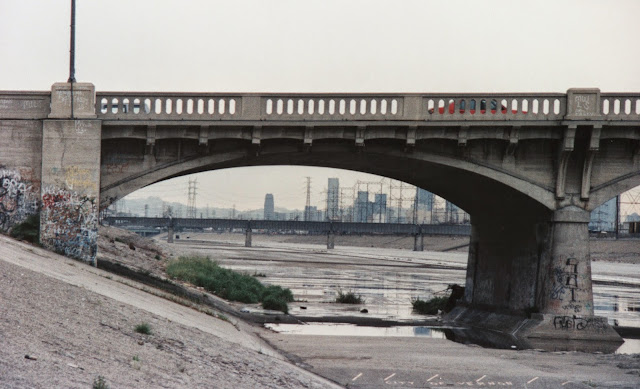 The Los Angeles River used to change it's course at flood stage and this wide concrete channel was built to try to keep it in place. In 1914 the a flood covered the City of Vernon. There are efforts by several groups to return the river to it's natural condition, while addressing the threat of flooding.