Just north of yesterday's Napa Valley Railroad Bridge the Napa Creek flows into the Napa River. Over the next few days we'll study some of the bridges that cross Napa Creek.

The Jefferson Street Bridge (21C0010) was originally a closed spandrel stone arch but it was widened on its upstream side with an open spandrel concrete arch and on its downstream side with a three span 'T' beam structure on pile extensions.

The Jefferson Street Bridge is 99 ft long with a 49 ft center span. It's 58 ft wide but this was considered inadequate for 14,000 vehicles a day and the bridge received a sufficiency rating of only 56 and it was appraised as structurally obsolete. 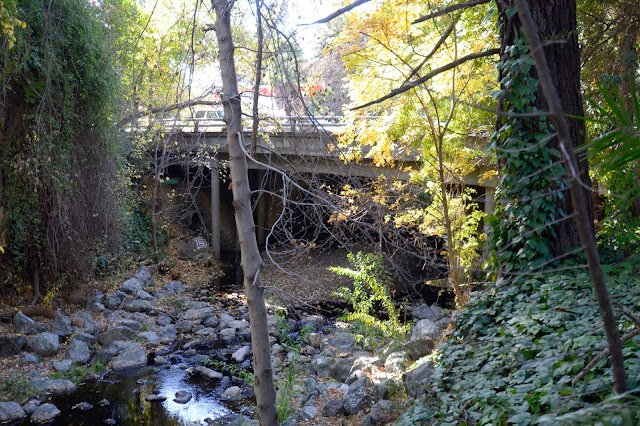 The original bridge was built in 1904 and the widening took place in 1970. You can barely see the original structure which may explain why this 110 year old bridge hasn't received a entry into the National Register of Historic Places. I also noticed that the banks on the downstream side are covered in sandbags, which may be related to scour.