Standing on Stanley Lane and looking east I took a photo (shown above) of the Napa River Bridge and Overhead (21 0049). It's a 13 span cast-in-place prestressed continuous box girder bridge on tall single column bents and end-diaphragm abutments. This bridge carries State Route 29 over the Napa Valley Railroad (the 'Wine Train') and the Napa River. It is 2230 ft long with a 250 ft span over the river. The bridge provides 100 ft of vertical clearance over the river, which explains why I could photograph it while standing 1-1/2 miles away. It was built in 1977 and retrofitted in the early 1990s. 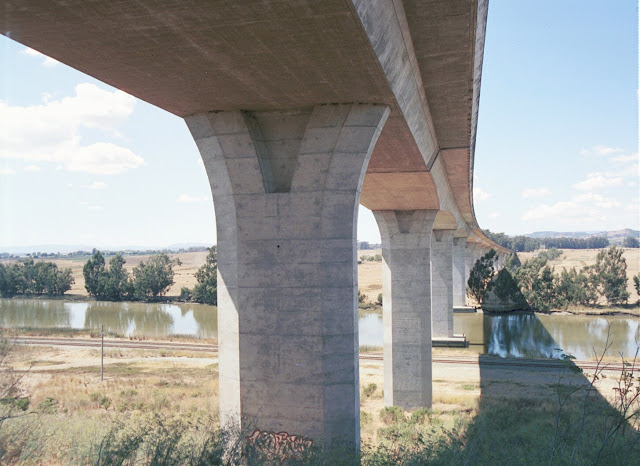 I had previously visited this bridge after the September 2, 2000 M5.2 Napa Earthquake. The bridge is composed of four frames separated by three unusual hinges. Instead of a bench for the longer cantilever spans to rest on, they are supported by concrete pistons with steel stoppers (see drawing below). The earthquake widened the hinge openings an inch or two, but the large expansion joint gaps (see photo below) are a pre-existing condition.

Napa County, California Bridges: State Route 29 Bridge over the Napa River by Mark Yashinsky is licensed under a Creative Commons Attribution-NonCommercial-NoDerivatives 4.0 International License.
Posted by Mark Yashinsky at 9:00 AM