Another view of the three span railroad bridge converted for pedestrian use in Winters. We have seen several of these conversions as railroads have gone bankrupt and communities try to protect their history. In yesterday's photo we could see where the single set of tracks had been marked with red strips on the concrete deck of this pedestrian bridge.

This foot bridge is a 368 ft long three span Pratt Truss that was built in 1906. It looks like the piers have had a seismic retrofit to prevent the spans from unseating during an earthquake. 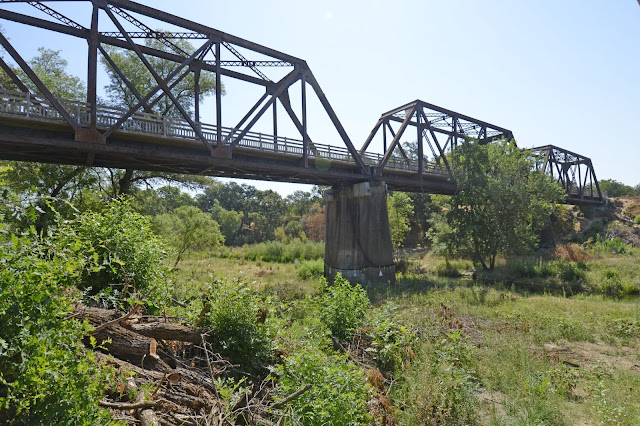 The bridge was originally built to carry the Southern Pacific Railroad, but it was abandoned in the 1960s. I was surprised there was no railroad going through town because of all the stacks of big boxes sitting in the orchards on the south side of Putah Creek. I would have thought the railroad could have made some money moving nuts, but the Mariani Nut Company came to Winters after the railroad's demise. 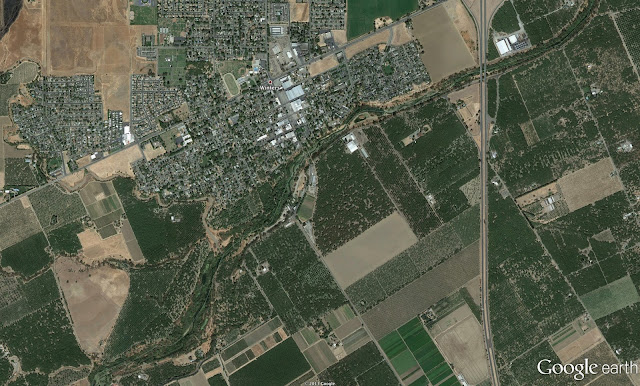 The bridge was renamed in 2008 in honor of the former mayor of Winters who had worked to convert this old railroad bridge to pedestrian foot bridge. A timber railroad bridge had stood at this spot from 1875 until it was replaced by the steel truss bridge in 1906. In 1977 the Southern Pacific Railroad donated the bridge and the approaches to the City of Winters.