There are also several old bridges that cross the American River in Folsom.

We previously looked at the 1917 Rainbow Bridge that carries Greenback Lane across the American River in 2009. The city has built a nice viewing area to look at the Rainbow Bridge (and at an adjacent Truss Footbridge).

The Rainbow Bridge (24C0067) was widened in 1969 but still has only a 25 ft wide deck. The bridge carried over 31,000 vehicles a day in 2010. Consequently the bridge has a sufficiency rating of 63.5 and is considered functionally obsolete. 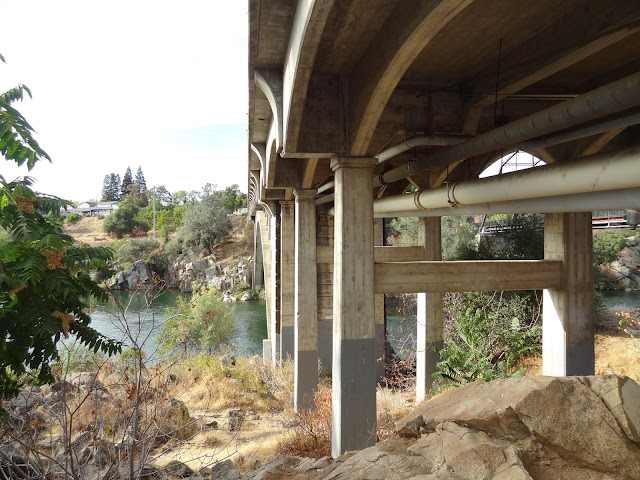 This bridge is similar to the other bridges around Folsom with two column bents and mini-capitals at the tops of the columns. We can see how the bridge deck was slightly widened beyond the columns in the photo above.

Sacramento County, California Bridges: Greenback Lane Bridge across the American River by Mark Yashinsky is licensed under a Creative Commons Attribution-NonCommercial-ShareAlike 3.0 United States License.
Posted by Mark Yashinsky at 9:00 AM