We've been working our way downstream along the Sacramento River, which is the eastern border of Yolo County. About 1/2 a mile south of yesterday's 'I' Street Bridge is the big (39 span) Sacramento River Viaduct (24 0004L/R), which is the principal interstate arterial (6346 ft long) over streets, highways, railroad tracks, and the Sacramento River. It includes connector ramps on both sides of the river (see figure below). We used to practice rope climbing on the part of the bridge over the Caltrans' maintenance yard on the east side of the river. 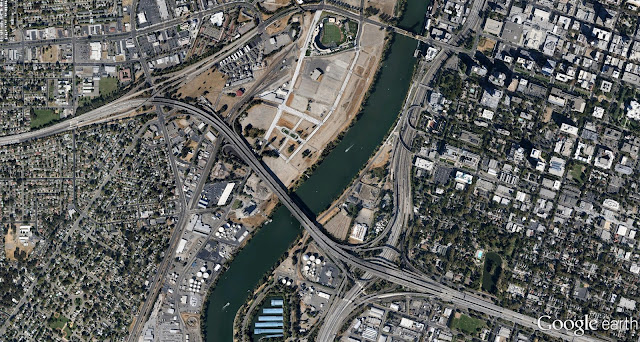 Most of the Sacramento River Bridges have an official and popular name and the Sacramento River Viaduct is commonly referred to as the Pioneer (or Pioneer Memorial) Bridge. It's a haunched (for the long spans over the river) steel girder bridge. Steel must have been a popular material for Sacramento River crossings in the 1960s. The bridge carries over 100,000 vehicles a day which has worn down the concrete deck (the current deck condition is rated poor (3 out of 9)). 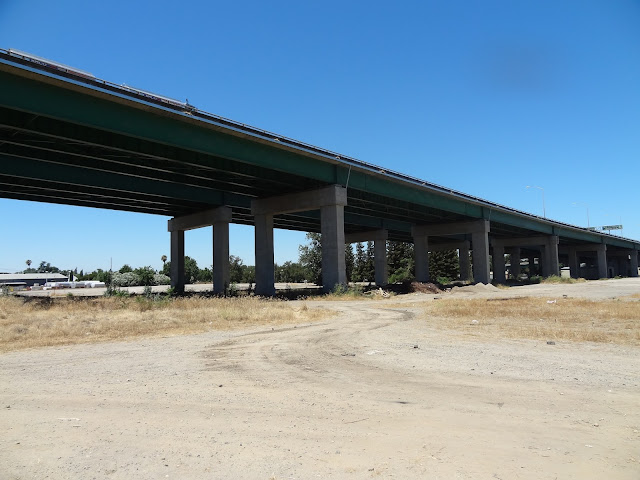 The part of the bridge across the river in Yolo County crosses an empty yard while the city of West Sacramento attempts to develop this area. The city of Sacramento on the east side of the river has similar hopes and aspirations for their riverfront.

Yolo County, California Bridges: Pioneer Memorial Bridge across the Sacramento River by Mark Yashinsky is licensed under a Creative Commons Attribution-NonCommercial-ShareAlike 3.0 United States License.
Posted by Mark Yashinsky at 9:00 AM