Today's bridge is similar to the other Ponderosa Way Bridges that we've studied. They all carry US Forest Service roads and they all cross over North Forks (of the American River, the Mokelumne River, and the Calaveras River).

However, the previous two Ponderosa Way Bridges were pony trusses while today's bridge is a deck truss. For some reason, the usually reliable Bridgehunter calls it a pony truss and Uglybridges calls it a through truss! This is probably because no one has been willing to drive the severely rutted Ponderosa Way for two miles to see it. Once I got to the bridge site, I had to climb over lots of poison oak to get close enough to take a photo. The river is narrow and so heavily forested that I could only photograph the bridge through the brush.  I assume you could drive across the bridge but I didn't try. The bridge has an operating rating of 27 tons  and my Ford Pickup weighs 2.5 tons.

The Ponderosa Way Bridge (30F0002) is a two span Warren truss bridge that was built in 1935. The spans are 75 ft long and the bridge is 169 ft long so there are also short approaches (see photo below). 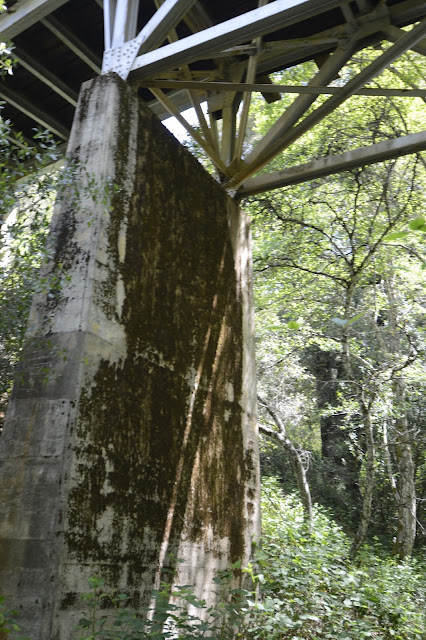 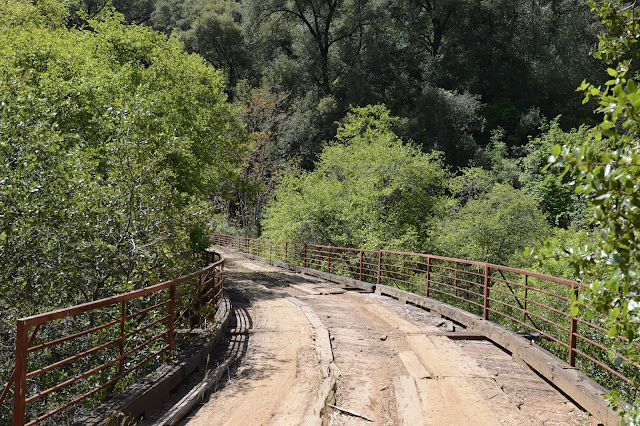 However, since the bridge is on an unmaintained road, it probably doesn't matter. It carried 100 vehicles a day in 1983, which was the last time someone put a counter on the bridge. It's only 13.5 ft wide and it has good wooden curbs and steel barrier rails. It had a sufficiency rating of 43.5 (from the 2010 inspection) and the engineer estimated it would cost $815,000 to improve the bridge from 'Structurally Deficient." 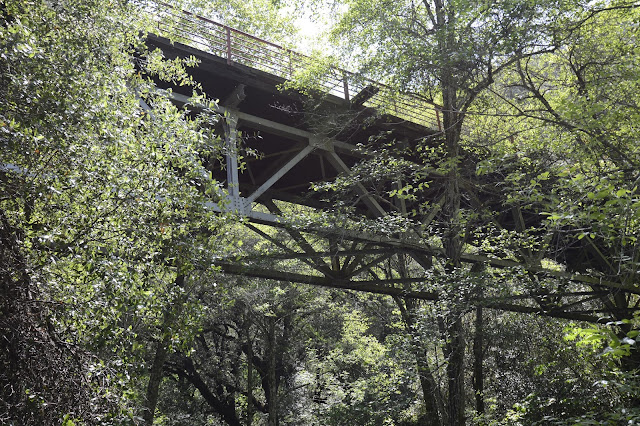 Calaveras County, California Bridges: Ponderosa Way Bridge across the North Fork of the Calaveras River by Mark Yashinsky is licensed under a Creative Commons Attribution-NonCommercial-ShareAlike 3.0 United States License.
Posted by Mark Yashinsky at 9:00 AM

Drove across the bridge today (9/25/13). Bridge is still usable but Ponderosa Way is deteriorating rapidly so in another few years you probably won't be able to get to the bridge except maybe on foot.