Calaveras County, California Bridges: SR 26 across the Middle Fork of the Mokelumne River

You may recall when we visited the North Fork of the Mokelumne River Bridge carrying State Route 26 I mentioned we'd be visiting the Middle Fork and South Fork Bridges once we got to Calaveras County. Anyway, today we are visiting the Middle Fork of the Mokelumne River Bridge (30-0052) that carries SR 26 (called the Stephen P. Teale Highway at this location) and the bridge is named the Tom Taylor Bridge.

The bridge has nicely decorated concrete barrier and a sloping exterior girder, which are both attractive features. Professor David Billington from Princeton (and author of the Tower and the Bridge) once came to Caltrans and complained that we build cookie-cutter bridges. At least we use nice cookie cutters! 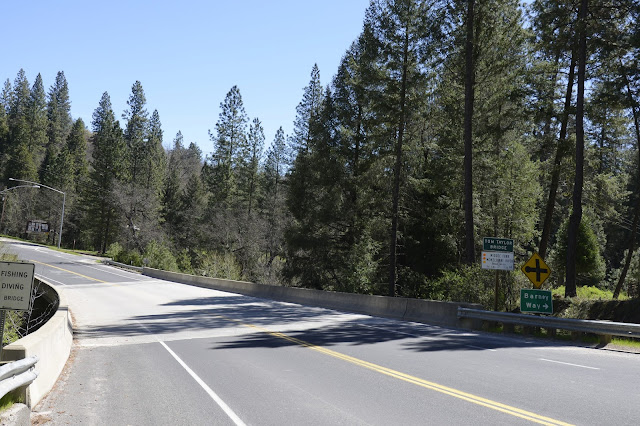 Stephen P Teale was a California State Senator representing Railroad Flat, California. Even I heard of him, or at least I've heard of the Stephen P Teale Data Center where we used to send our GTStrudl bridge analyses before desktop computers became faster. Thomas Taylor was a Calaveras County Supervisor who died in 2005 and got this one span bridge named after him.

Calaveras County, California Bridges: SR 26 across the Middle Fork of the Mokelumne River by Mark Yashinsky is licensed under a Creative Commons Attribution-NonCommercial-ShareAlike 3.0 United States License.
Posted by Mark Yashinsky at 9:00 AM