After carrying traffic through Kashiwazaki, Route 8 ascends through mountains and steep canyons.

The Yoneyama Bridge is a 280 meter long steel girder bridge supported on tall, four-legged steel towers, shorter two-legged piers, and seat-type abutments. This bridge had been retrofit , which may have helped during the 2007 Kashiwazaki Earthquake.  Lateral and vertical restrainers and stoppers were added at the superstructure and the steel towers were filled with concrete and stiffeners and doubler plates were added to make the towers stiff and strong (at a cost of about $1 million per tower). 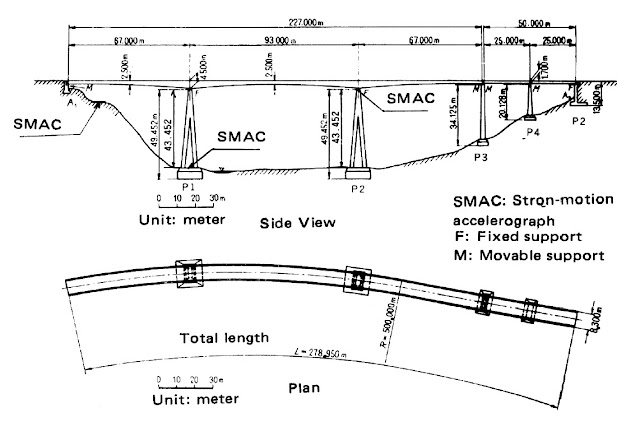 This may explain why a fixed steel bearing (at the highest tower) was damaged during the earthquake, since it was the stiffest element along the lateral load path.  Other damage occurred as a result of the superstructure pounding against the abutment backwalls.
Shikegi Unjoh (from Japan’s Public Works Research Institute) said, ‘The Yoneyama bridge had seismometers but NILIM, who manages the strong motion observation system at MLIT, said that they were an old type and out-of-order because no maintenance had been done for a long time. There is another new seismometer at ground level and it had a record during the 7/16 main shock. As Toshio Iwasaki wrote, at 659 gal peak acc, this was not a weak shake!’ Iwasaki-san mentioned that he had written several papers about this bridge after the 1964 Niigata earthquake (Iwasaki, 1972) (Kuribayashi, 1967). One paper, “Response Analysis of Civil Engineering Structures Subjected to Earthquake Motions” can be downloaded at: http://www.fujipress.jp/JDR/open/DSSTR000100020012.pdf.

Niigata, Japan's Bridges: Yoneyama Bridge on Highway 8 by Mark Yashinsky is licensed under a Creative Commons Attribution-NonCommercial-ShareAlike 3.0 United States License.
Posted by Mark Yashinsky at 9:00 AM