After the earthquake, the Hokuriku Expressway was jammed with traffic, which prevented emergency vehicles from reaching the damaged area and also slowed repairs to reopen parts of the expressway.  Although the Hokuriku Expressway is a privately owned toll road, it was opened to the public to help during the emergency.  There were at least 17 locations where damage was severe enough to close parts of the expressway (see figure below).  There was damage to bridges, tunnels, roads, and to other highway facilities. The damage extended from 338 KP to 416 KP, for a distance of about 78 km. 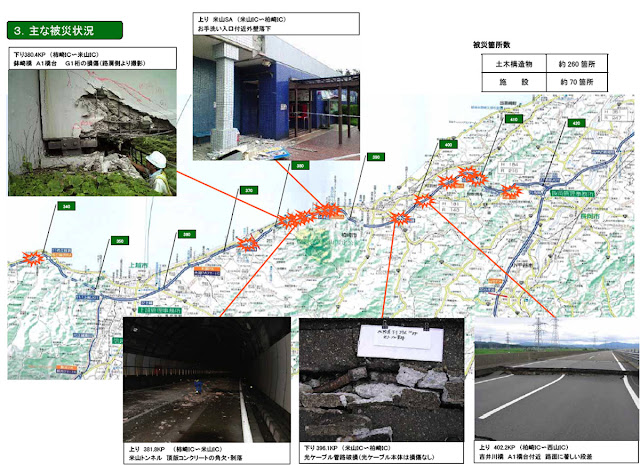 During the earthquake the embankments on the Hasaki Bridges moved downhill, exposing the wingwalls. The concrete spalled at the bottoms of the girders due to the abutment banging against them  (the bridges are 29 km from the epicenter but closer to the fault rupture). The spall occurred about 0.6m from the abutment backwall and on the other side of the bearing. Apparently, as the girders went into compression, this was the location of maximum negative moment.  The damage occurred at the north end of the west bridge (small cracks were observed on the east bridge). 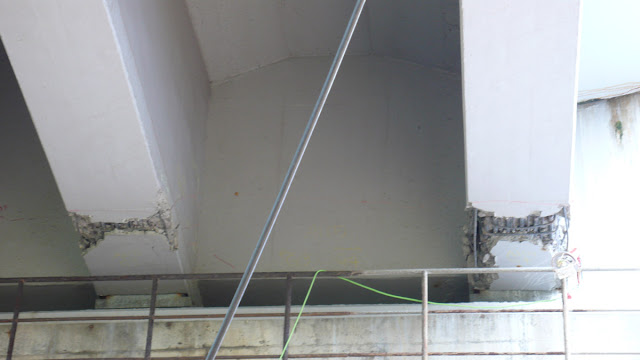 When we arrived at the scene, both directions of traffic had been diverted to the east bridge, they had finished driving sheet piles around the abutment to stabilize the soil, and were casting a large pad at the west bridge so that they could jack up the southern three spans and repair the girders and bearings.

Niigata, Japan's Bridges; Hasaki Bridges on the Hokuriki Expressway (2) by Mark Yashinsky is licensed under a Creative Commons Attribution-NonCommercial-ShareAlike 3.0 United States License.
Posted by Mark Yashinsky at 9:00 AM