After looking at the toll road (the Horukiru Expressway) and the major expressway (Highway 8) going through town, we walked along the Sabaishi River that flows through Kashiwazaki. This river frequently floods its banks, leaving a deep layer of uncompacted sediment that liquefies after every earthquake. However bridge engineers were aware of this weak soil and supported their bridges on deep strong piles. The resulting liquefaction and lateral spreading during earthquakes slides around the piles (founded on firmer material) without causing bridge damage.

In the map below we can see that the Heisei Hashi crosses at a meander that created a large island in the river. In the photo above I am standing on the island photographing the east side of Heisei Hashi. The island had settled and spread due to ground shaking during the Kashiwazaki Earthquake.

In the photo below, I am standing on the other side of the bridge photographing the approach on the west side which has also settled several feet. However, this single span box girder bridge had abutments supported on piles that were undamaged by the earthquake and were able to carry traffic once new approaches were constructed. Compare this with several bridges across the Avon River in Christchurch where the abutments were damaged due to lateral spreading during last year's earthquake. 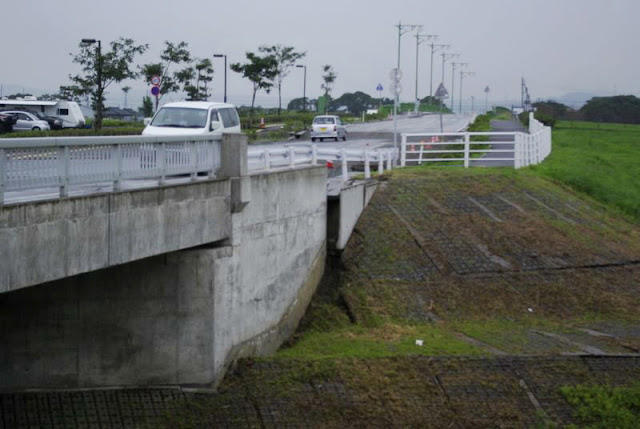 Niigata, Japan's Bridges: Heisei Bridge across the Sabaishi River by Mark Yashinsky is licensed under a Creative Commons Attribution-NonCommercial-ShareAlike 3.0 United States License.
Posted by Mark Yashinsky at 9:00 AM