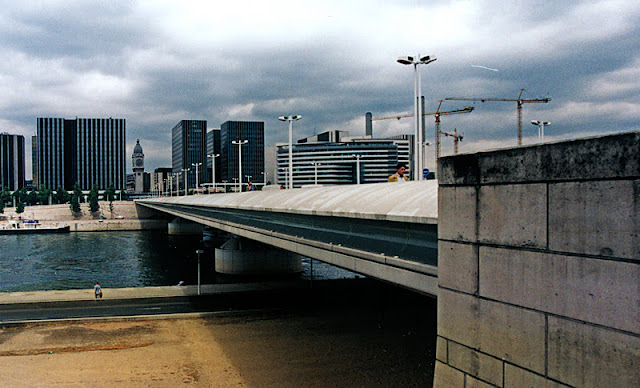 The next bridge downstream on the Seine after the Pont de Bercy is the Pont Charles de Gaulle.

This bridge is a steel box girder with a reinforced concrete slab cast on top. There are shear studs connecting the slab to the steel box so that they can act together in bending. The concrete slab is transversely prestressed so that it can span the 31.6 m (104 ft) superstructure width.

Its a four span bridge supported by seat-type abutments and elliptical caissons with oddly shaped steel bearings. Each superstructure segment was manufactured in a plant, brought to the site at night, welded to the previous segment, and then pushed out over the Seine. Perhaps the strange bearings allowed the superstructure to be pushed out with minimum friction. More likely they changed the bearings after construction was completed.

The winning design was chosen through an international competition in the late 1980's and completed in 1996.  My feeling is that this design (by the architects Louis Arretche and Roman Karasinski) was chosen because its thin section and clean lines don't interfere with the view of the Seine and its surroundings.