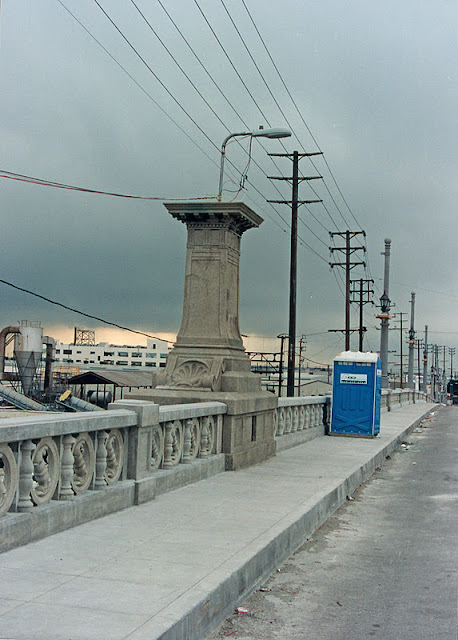 I don't have a good photo of Olympic Boulevard Viaduct (a viaduct is a bridge composed of many spans). This viaduct is 1/4 mile south of the busy Santa Monica Freeway, 1/2 mile north of East 20th Street, and there are locked gates along the Los Angeles River so it was hard to get a good photo.

When I visited the viaduct in 2000, it was being taken apart for a seismic retrofit combined with some general maintenance.  The beautiful balusters in the photo are new and made using glass fiber reinforced concrete to match the original railing. The lampposts were removed for repair and temporarily replaced with strictly utilitarian lamps. The ornamental pylon supporting the lamp is obviously the original.  This bridge is in the same Beaux Arts style that was used on many of the arch bridges. The retrofit, like most arch bridge retrofits, involves tying the deck together at the expansion joints in order to carry the inertia force to the end piers. An additional requirement was that the retrofit had to be hidden from the public to preserve the aesthetics of the original structure. It was designed by Dokken Engineering and cost $9 million. More information is at LACity.

The Ninth Street Viaduct was built in 1925 but got its name changed (as well as the name of the boulevard) in honor of the 1932 Los Angeles Olympics.  Trolleys once ran up and down the boulevard and so a stronger girder and a thicker deck were provided along the middle of the viaduct.  The structure is 1,422 ft (433 m) long, with three open spandrel reinforced concrete deck arches over the Los Angeles River and with reinforced concrete T-girder spans that cross over many railway tracks on both sides of the river before descending to the ground. Very substantial piers that are well-anchored into the soil were required at the ends of the arch spans to resist the longitudinal arch force.  The designer of record was Los Angeles city engineer Merrill Butler whose staff must have designed every arch bridge in downtown Los Angeles.