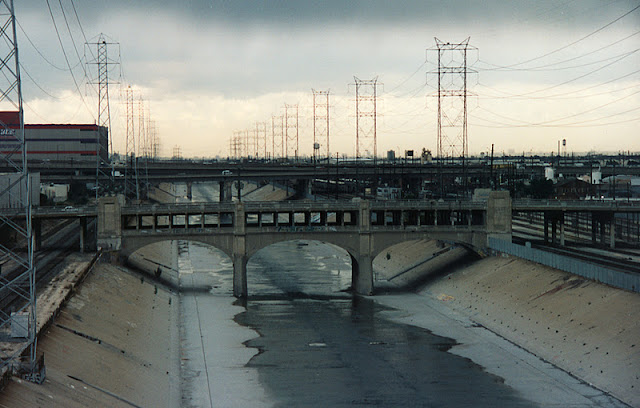 The Seventh Street Viaduct is one block south of the Sixth Street Viaduct we looked at yesterday.  This structure, built in 1910,  began as a three-span arch bridge over the Los Angeles River.  However, a second deck was added  in 1927 to allow traffic to drive above the trains that ran along both sides of the river.  You can no longer drive on the first deck because it now supports the second deck with three- column bents between each pier.

The Seventh Street Viaduct is 1000 feet (305 meters) long and 56 feet (17 meters) wide.  The three reinforced concrete deck arches over the Los Angeles River are 92 feet (28 meters) in length.  This viaduct is an interesting and attractive structure in spite or, perhaps due to,  the  addition of the second deck  which was  an afterthought rather than  part of the initial design.   It is unclear from the photograph whether the piers going up to the second deck were added in 1927 or were originally porticoes.   Note the nicely detailed lamp posts atop each pier on the top deck.  The industrial setting and spray painted art provide an evocative context.   It is difficult to imagine how the bridge looked in 1910 when it was originally constructed.  The Los Angeles River was not yet a concrete channel.  However,  it was used as an open quarry for aggregates used in the making of  concrete.