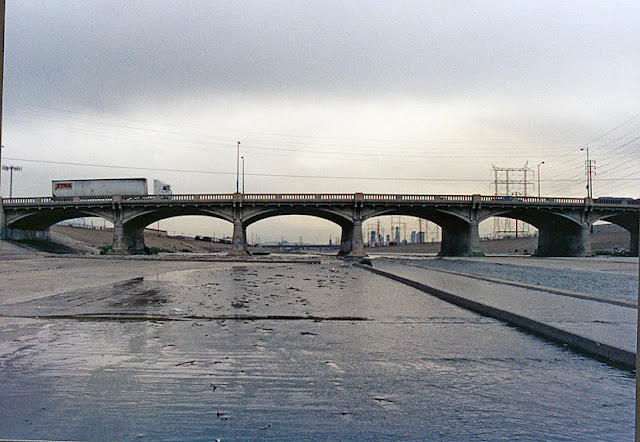 The Atlantic Boulevard Bridge is a seven span, reinforced concrete deck arch that crosses the Los Angeles River about three miles south of the 26th Street Bridge.  This bridge is 464 ft (141.4 m) long with a maximum span length of 60 ft (18.3 m) and 72 ft wide (21.8 m) from edge of deck to edge of deck with six traffic lanes.  The bridge length is greater than 7 x 60 = 420 ft because the distance is from the beginning of bridge (BB) to end of bridge (EB) which is measured from behind the abutments.

The arches are supported by wide pier walls and by end diaphragm abutments. It was designed by the County of Los Angeles and completed in 1931.  Some of the architectural features of the bridge, like the original lamps that were mounted on pedestals above the piers and abutments have been removed.

Note how wide the Los Angeles River has become. The many railway tracks that followed the river north of downtown have now moved into a trench east of the river. The Alameda Corridor Project eliminated all at-grade railway crossings between the Ports of Long Beach and Los Angeles to downtown Los Angeles http://www.acta.org/. However, the transmission lines still follow the river.

This is the most southern of the architecturally unique arch bridges that cross the Los Angeles River. There are a dozen of these bridges, starting with the Glendale Hyperion Viaduct north of downtown Los Angeles, which we will look at tomorrow.

What about the
washington Blvd. Bridge?