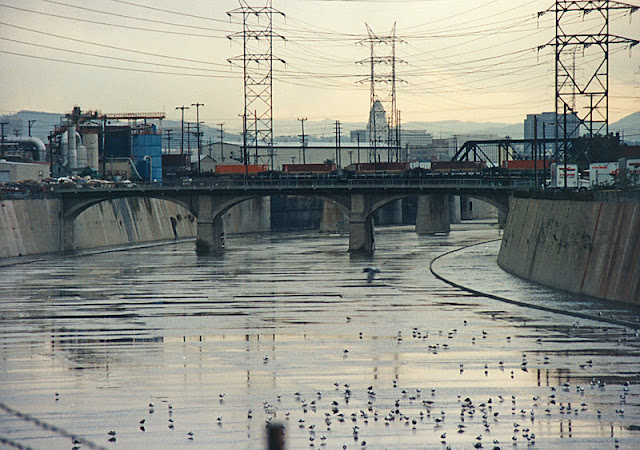 We are traveling south from Olympic Boulevard along the Los Angeles River to the City of Vernon.  Both Olympic Boulevard and 26th Street require three spans to cross the river, which continues to widen until we arrive at the estuary in Long Beach. The Los Angeles River's concrete channel gets bigger and bigger to carry all of the runoff that would otherwise flood the region during heavy rains. However, it remains too small to carry anything close to the 100 year flood, due to the reduction of vegetation and soil in the Los Angeles Basin to absorb the runoff.

The 26th Street Bridge was built in 1927 and had additional work done in 2000. It carries only two lanes of traffic and is composed of three 90 ft (27.4 km) reinforced concrete closed spandrel deck arches.  It is supported by squat, rectangular, single column bents and end diaphragm abutments.  It has some of the architectural features similar to the other arch bridges such as a knobby texture between the arches and the deck, floor beams that support the cantilevered deck, and nice details at the bents. The street lamps over the abutments and bents, if they once existed, are now gone.
This photo looks north at downtown Los Angeles.  We can see the Los Angeles City Hall and the Hollywood Hills in the background. A good reference is at http://bridgehunter.com/ca/los-angeles/53C0868/