Bridges of Lyon, France: The Pont Winston Churchill across the Rhone River

After looking at a railroad bridge and a pedestrian bridge we'll take a look at a car and truck bridge across the Rhone. The Pont Winston Churchill is a three span prestressed concrete box girder bridge that was built in 1982. It's the latest in a series of bridges built at this location, which included the Pont Marshal de Castellane that was built in 1862 by lashing boats together. You can still see the piles from the previous bridge in front of the pier in the photo above. Note how clear and blue the river is and also the uprooted tree that was carried by the river and is now against the far pier.

The current bridge has seven traffic lanes and broad sidewalks. The seventh lane is a turning lane that switches from the east end to the west end to accommodate the complicated intersections at the ends of the bridge (see photo below).

The Pont Winston Churchill is a continuous structure on simple supports. It acts as a long beam that is supported on bearings at two piers and at two seat-type abutments. We can see the large expansion joint devices that connect the ends of the bridge to the roadway in the photo above. Another interesting thing about the superstructure is that it is composed of two box girders with steel bracing between the boxes to support the deck (see top photo). 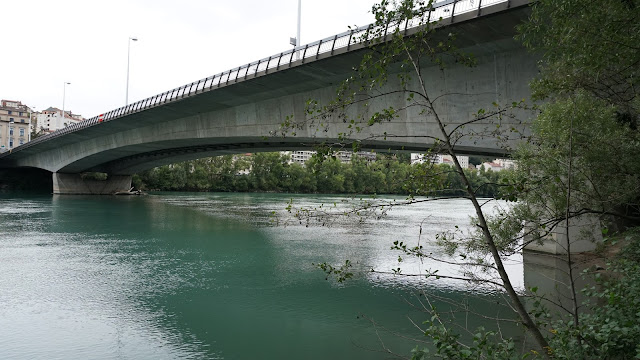 The Point Winston Churchill has a streamlined shape along the superstructure, along with attractive railings, light posts, piers, and abutments. The bridge was named after the English Prime Minister who was instrumental in bringing about the liberation of France during the Second World War (there's also a boulevard named after Franklin Roosevelt).