Continuing upstream we came to a campground and the Sourgrass Bridge. A sign on the railing states, "The Sourgrass Bridge, 1999, is a cooperative project of Sierra Pacific Industries and the Stanislaus National Forest. At this site the original 1962 bridge was destroyed in a mudslide on January 1, 1997."

This area along the Stanislaus River was inhabited by Miwuk Indians for over 2000 years. Early artifacts such as grinding stones and middens have been preserved here. A massive landslide in 1997 carried mud and debris down the canyon side from above Highway 4, destroying the original Sourgrass Bridge.

Another bridge, the Boardings Cross Footbridge is two miles downstream, but I missed it because of all the winding dirt roads that go from SR 4 to the river.

The Sourgrass Bridge is a new, three span concrete box girder bridge on wide pier walls across the North Fork of the Stanislaus River. 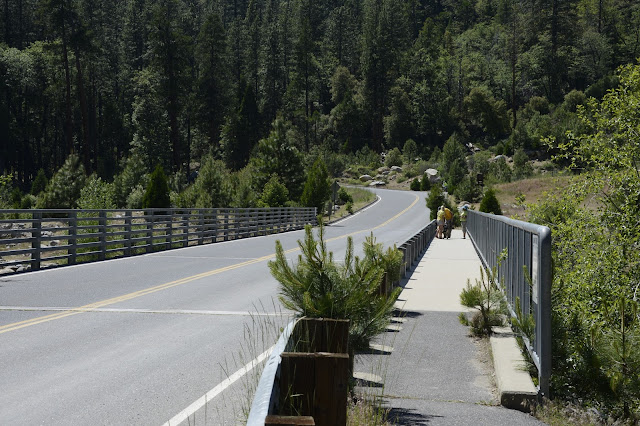 Calaveras County, California Bridges: Sourgrass Bridge across the North Fork of the Stanislaus River by Mark Yashinsky is licensed under a Creative Commons Attribution-NonCommercial-ShareAlike 3.0 United States License.
Posted by Mark Yashinsky at 9:00 AM