Today's bridge is only fives miles east of the Mira Paradis Drive Bridge (that we studied yesterday). However, the road is so deeply rutted that it took me several attempts before I could take a photograph of it. I drove in from the north but the road was so eroded that at several places I had to get out to make sure the road was wide enough for my tires. Eventually I turned around because the road was blocked by a van. I was finally successful driving up from the south, but I stopped my truck a mile from the bridge and walked the rest of the way just in case. 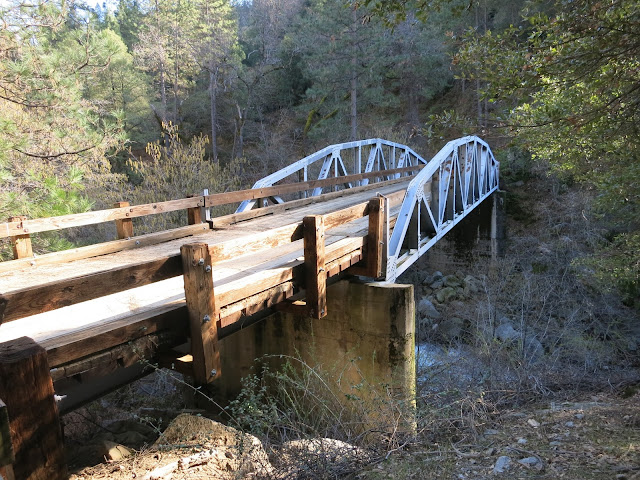 It is a pretty little pony truss bridge and it's in pretty good shape considering that nobody uses it. I couldn't find any information about it, probably because the road and the bridge have been abandoned.  We'll take a closer look at it tomorrow.

El Dorado County, California Bridges: Rocky Bar Road Bridge across the Middle Fork of the Cosumnes River (1) by Mark Yashinsky is licensed under a Creative Commons Attribution-NonCommercial-ShareAlike 3.0 United States License.
Posted by Mark Yashinsky at 9:00 AM