The next bridge across the North Fork of the Cosumnes River is a two span steel girder structure. This bridge and the previous Happy Valley Road Bridge get almost no traffic. I tried driving to this bridge from the south but Sweeney Road had a locked gate and a private property sign. I was able to get to the bridge from the north but there's no traffic since the road has a locked gate to the south.

Looking closely at this bridge you can see brackets on the exterior girder web, probably for a barrier rail that's now missing. Instead there is a flimsy looking rail on top of a very sturdy concrete curb. I wonder if a flood broke the handrails at the brackets?
The girders are tapered at the supports, just the opposite of what you would expect. Also, the girders have rivets which is strange for a bridge built in 1957. The girders are labeled 'Bettendorf Patent,' but I couldn't find any information about a fabricator named Bettendorf.

Each span is 32.5 ft long for a 67 ft long bridge, which is interesting since the Happy Valley Bridge downstream was only 37.5 ft long. The river has been freed from its stony banks at this location. 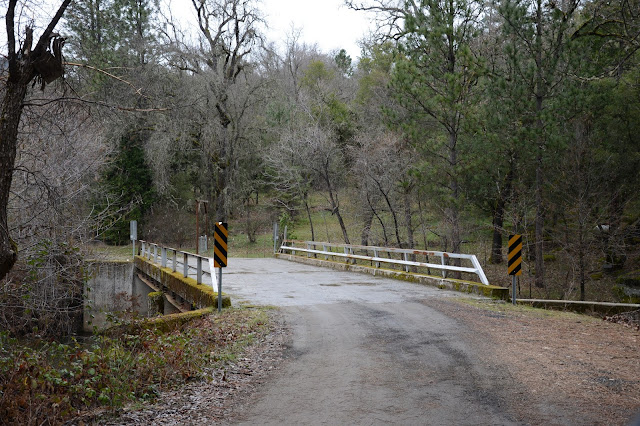 All the traffic and busy roads are to the west and people seem content to stay on one side of the river or the other in Eastern El Dorado County.

El Dorado County, California Bridges: Sweeney Road Bridge across the North Fork of the Cosumnes River by Mark Yashinsky is licensed under a Creative Commons Attribution-NonCommercial-ShareAlike 3.0 United States License.
Posted by Mark Yashinsky at 8:40 AM

Could the beam be "recycled" train car substructure??

The Bettendorf Company was a manufacturer of railroad cars in the early 1920s.