The next two bridges straddle the Placer/El Dorado County Line because the Middle Fork (the natural border between the counties) joins the North Fork just upstream of today's bridge.

The State Route 49 Bridge (19 0035) crosses what is still called the North Fork south of the confluence of the two rivers. It is a three span steel stringer bridge on concrete pier walls and seat-type abutments. It is 348.1 ft long with a 173.9 ft center span across the river.

We can see the remains of the previous bridge (from 1948) lying in the river beneath the current bridge (from 1965). I recall a big flood in 1964 that caused a lot of damage all along the west coast of the US. 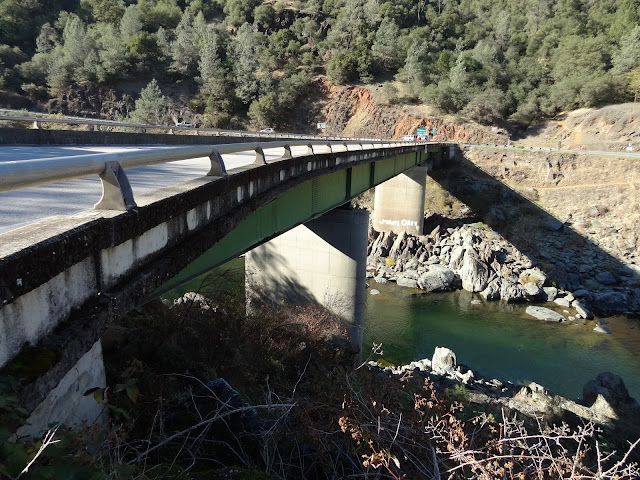 In the photo above, we can see that the State Route 49 ends in a 'T at the end of the bridge. Travelers can make a left to continue on State Route 49 north into Nevada County or make a right onto old Foresthill Road that takes them east along the canyons of the North Fork of the American River to Soda Springs.

Placer County, California's Bridges: State Route 49 Bridge across the North Fork of the American River by Mark Yashinsky is licensed under a Creative Commons Attribution-NonCommercial-ShareAlike 3.0 License.
Posted by Mark Yashinsky at 9:00 AM