I spent yesterday traveling through heavy rain to photograph some bridges that I had previously missed across the North Fork of the American River. I was hoping that I now had the complete set of North Fork Bridges, until I stumbled upon Russell Towle's beautiful blogs about the river.

Russell pointed out several bridges that I still haven't photographed. Way upstream are the Palisade Creek and the Soda Spring Road Bridges. Just a couple miles upstream from today's bridge are the remains of the Humbug Bar Bridge (see below). This whole area was heavily mined and many of the bridges used during the nineteenth century have been rebuilt (like the Euchre Bar Bridge) or lie in ruins (like the Humbug Bar Bridge). Apparently, I still have a lot of work to do if I want a complete set of photos of the North Fork Bridges. 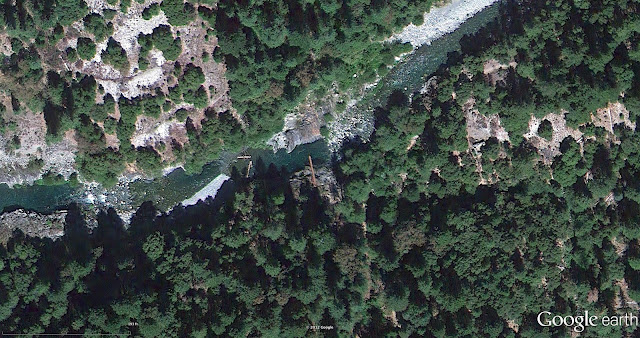 The Euchre Bar Bridge is another suspension bridge with short, latticed towers similar to the Iowa Hill and Yankee Jim Bridges. However, it has a narrow deck that was expressly built for hikers. In fact, I had a strenuous hike down the well-maintained switchback trail from Iron Point to reach the bridge. Russell pointed out in his blogs that the current Euchre Bar Bridge is only the latest (built in 1965) of the many bridges built at this site. There are abutments and anchorages from several previously-built bridges nearby. 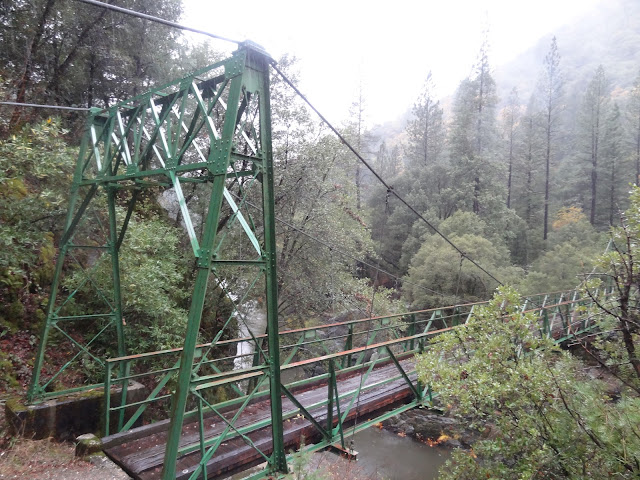 The names of the geography and structures along this river are strongly suggestive of the pursuits of the gold miners who once lived here. Euchre is a card game that was popular with the prospectors. A 'humbug' is an antiquated term for a deceitful person. Yankee Jim was a prospector (and horse thief). Shirttail Creek was where a prospector was found panning for gold just wearing a shirt.

Since, we are now at the farthest point that I've traveled upstream, over the next several days we'll go back downstream (from bridge to bridge) until we reach the confluence of the North Fork and the Middle Fork of the American River.

Placer County, California Bridges: Euchre Bar Bridge across the North Fork of the American River by Mark Yashinsky is licensed under a Creative Commons Attribution-NonCommercial-ShareAlike 3.0 License.
Posted by Mark Yashinsky at 11:29 AM