There are many North Fork of the American River Bridges, which may be why this bridge was originally named the Colfax-Iowa Hill Road Bridge. The bridge carries vehicles across the river to Mineral Bar Campground. It's owned by Placer County, who must have wanted to take vehicles off the old suspension bridge. It's a reinforced concrete CIP box girder bridge with a six foot depth and a 106 ft center span. The abutments are on steel H-piles but the single column bents are on spread footings. I would guess that the piers are in the riverbed which is bedrock while the abutments are on the eroded riverbanks and need some support.

The columns look to be at a funny angle with respect to the deck but they are skewed to be parallel to the river. Even the abutments (out of sight in the brush) are parallel to the river. This fork of the river seems slow and shallow in August but it must be deep or very fast during the winter. I don't know why anyone would want to camp here, but that's probably because I find mountain landscapes depressing. 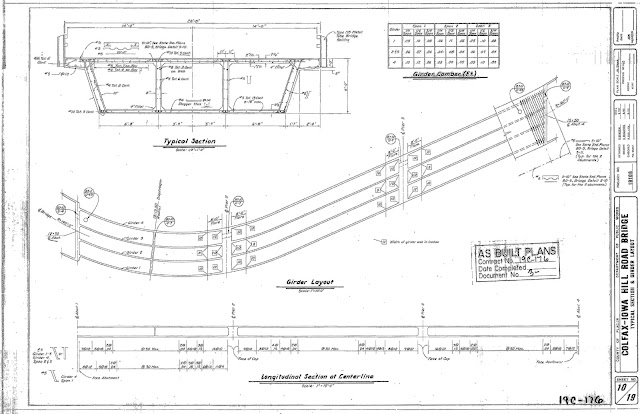 Placer County, California Bridges: Iowa Hill Bridges across the North Fork of the American River (3) by Mark Yashinsky is licensed under a Creative Commons Attribution-NonCommercial-ShareAlike 3.0 License.
Posted by Mark Yashinsky at 9:00 AM