I recently purchased a nicely illustrated book, "The Sumida Crisscross," from AbeBooks in Windermere, UK. I was pleased to obtain this almost new edition for only $40 after seeing it for sale on Amazon.com for $2000!  It even includes a dedication and signature by the author (Sumiko Enbutsu) to 'Lady Julia.'

I've bought many books on bridges, often to gain information for this blog. I wonder if I can bequeath all of these books to library somewhere or maybe nobody will want books anymore.. 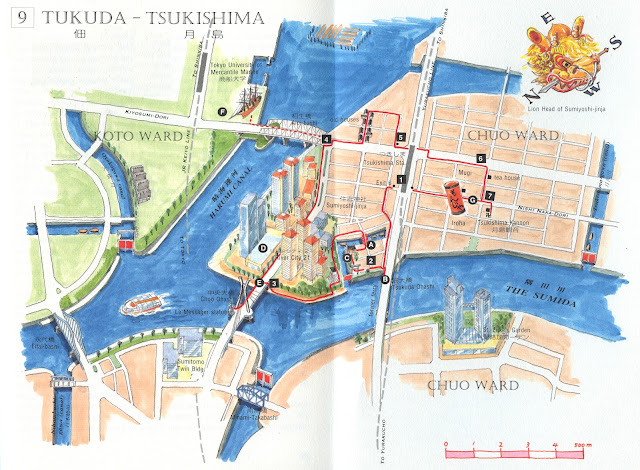 "The Sumida Crisscross" nicely describes the evolution of the Sumida River from a tidal estuary, to the home of the Shogun, to a floating pleasure world, to a polluted channel, to the center of Japan. The book was commissioned by an organization of Sumida River advocates (Sumida Link) and includes nine maps for different two to three hour walking trips across various river crossings.  I had to go to the end of the book to find our previous blog location, cruising up the Sumida River towards the Eitai Bridge.

Note that the previously viewed Aioi Bridge is across the Harumi Canal that was formed by the artificial islands built on the east side of the Sumida River. St Luke's (on the west side of the river) was included in my blog of June 21, 2011. Also note the many red gates that control access from the canals to the Sumida. I became familiar with them on a recent canoe trip with Masa-san who runs Paddlefreaks. We planned to paddle in a long figure eight along the canals in Tokyo but we were abruptly halted by one of these red gates and had to turn back.

Today's photo takes us back to the beginning of our journey up the Sumida River at the Rainbow Bridge Ramps, the blue Kounan highway bridge, and the Shinkansen Bridge. All of these bridges cross over the Keihinunga Canal just south of Tsukishima Island in Tokyo Bay. Of special interest is the Minato-ka Garbage Plant (with its multicolored smokestack) where much of Tokyo's trash is incinerated. These incinerators burn at extremely high heat and are a good way for a country without a lot of land to get rid of its garbage. The splendid Japanese author Haruki Murakami suggests a rather sinister use for these incinerators in his latest novel '1Q84.'