I was excited to be traveling to the Historic Bridge Park in Calhoun County, Michigan. After all, how many parks are dedicated to bridges? However, I was disappointed after driving for several hours to find the park was closed. Apparently, there had been an oil spill in the Kalamazoo River and the park was closed while the guilty party (Enbridge) cleaned up their mess.
Since no one was around, I went into the park anyway. The first thing I saw upon entering was a bright red through truss, the Charlotte Highway Bridge. According to the Bridge Park Website, it is an eleven panel Whipple through truss bridge that was built in 1886. It's 173 ft long and 14.4 ft wide. In the photo above, we are looking at what they call the fishtail style floor beams. However, they are replicas since the original floor beams were severely rusted and had been replaced.

The Charlotte Highway Bridge was the fifth bridge to be brought to the park. A photo on the Historic Bridges Website shows that the bridge was in bad shape when it first arrived. According to the website it is the only remaining bridge in Michigan that was built by the Buckeye Bridge and Iron Works of Cleveland, Ohio. The bridge was originally over the Grand River in Danby Township, Ionia County according to the Michigan DOT website. 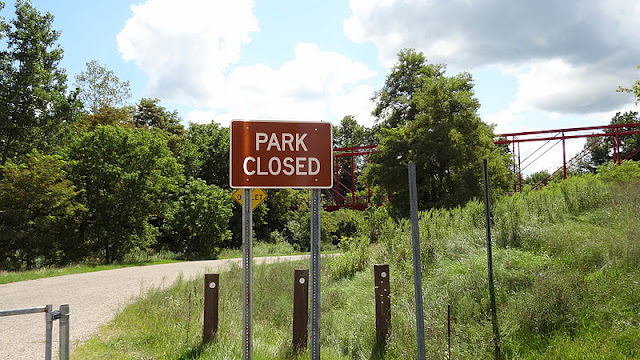 We'll take another look at this interesting bridge tomorrow.

Michigan's Bridges: Charlotte Highway Bridge at the Historic Bridge Park (1) by Mark Yashinsky is licensed under a Creative Commons Attribution-NonCommercial-NoDerivs 3.0 Unported License.
Posted by Mark Yashinsky at 12:01 AM