The Bauer Road Bridge is the final structure that I photographed at the Historic Bridge Park. There is actually a lovely stone arch bridge supporting the Norfolk Southern Railroad tracks (see Bridge #5 on map below) but I didn't notice it.

The Bauer Bridge was originally built in 1886 (or 1880?) and crossed over the Looking Glass River in rural Clinton County, Michigan. It was built by the Penn Bridge Company of Beaver Falls, Pennsylvania. It is a wrought iron, six panel, Pratt pinned through truss according to the Bridge Hunter Website. The bridge is 78.7 ft long, 13.8 ft wide, and has a vertical clearance under the portal brace of 13 ft.

The bridge was left unpainted because the wrought iron is apparently less susceptible to rust, at least according to the Historic Bridge Website. They also mentioned that the bridge was rebuilt at the park with parts from the Tallman Road Bridge, which was located near the Bauer Road Bridge in Clinton County. The website has an interesting discussion of the design of the Bauer Road Bridge, which was more delicate, had smaller members, and carried smaller loads. Many of the details were unusual and the reader is encouraged to go to the Historic Bridge Website to learn more about the construction of one of the oldest truss bridges in Michigan. 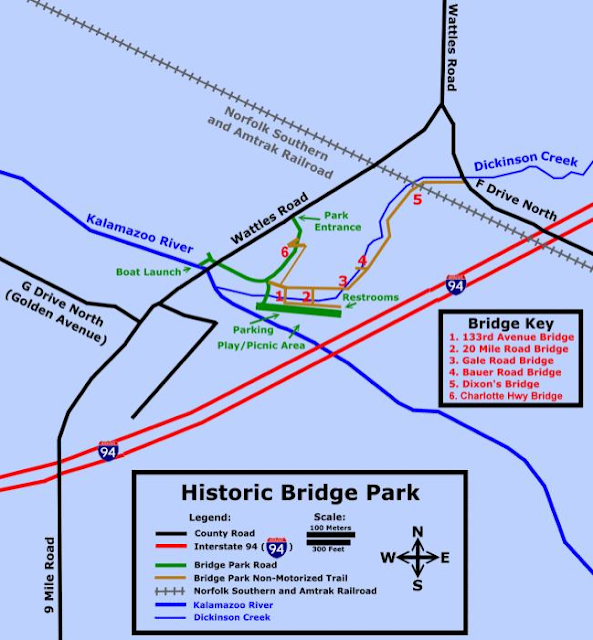 Michigan's Bridges: Bauer Road Bridge at the Historic Bridge Park by Mark Yashinsky is licensed under a Creative Commons Attribution-NonCommercial-NoDerivs 3.0 Unported License.
Posted by Mark Yashinsky at 1:28 AM