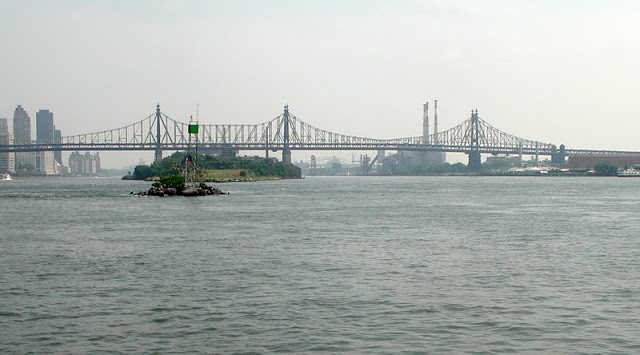 There are no crossings over the East River for the three miles north of the Williamsburg Bridge until we reach the Queensboro Bridge at Roosevelt Island.

This interesting structure was designed by Gustav Linderthal (Commissioner of Bridges for the City of New York) and completed in 1909. It is a double cantilever truss bridge without drop-in spans. The cantilever arms come together at mid-span over the channels on each side of Roosevelt Island.

This bridge had a variety of problems during its construction. A windstorm damaged a span, labor unrest caused delays, and the collapse in 1907 of another cantilever truss structure, the Quebec Bridge stopped construction until the dead and live loads could be reduced on this structure.

Although it is now thought to be a handsome structure, after it was built the bridge's architect, Henry Hornbostel complained, "My God - it's a blacksmith's shop." This complaint that steel bridges are less attractive was common at the beginning of the 20th century and led many cities to prefer reinforced concrete bridges for their river crossings.