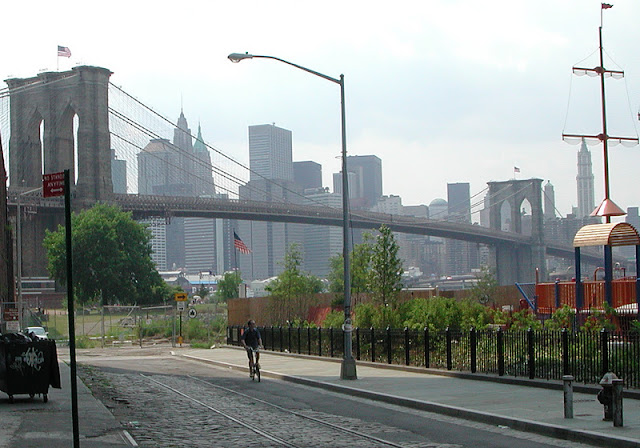 A view of the Brooklyn Bridge from Brooklyn. A nice thing about this view is the Manhattan skyline is behind the bridge.

John Roebling, a German immigrant, was a romantic, a follower of Hegel, and a tough dad. When the Civil War began, he saw his son sitting at the dinner table and demanded to know why he hadn't joined the army.
Colonel Washington Roebling conducted himself well in the war and then returned to help his father.

In those day, workers labored under the caissons, removing the soil to allow the tower foundations to slowly sink to the correct depth. Pressurized air was used to keep the area under the caisson's dry. When workers returned to the surface, the pressurized gas in their blood vessels exploded, injuring and sometimes killing them. Eventually, they learned to rest in the airlock while the air pressure in their bodies slowly returned to normal. This lesson came too late to help Washington, who was incapacitated by caisson disease and spent the next eleven years watching his wife build the bridge from his bedroom window. Despite his illness, he outlived his wife by many years and even remarried.