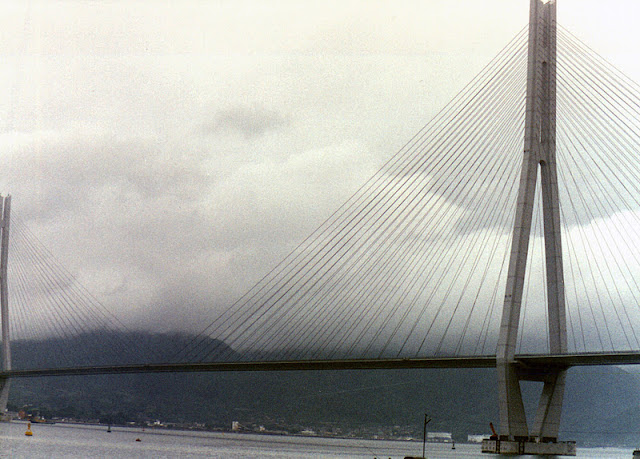 Private corporations own, maintain, and collect toll revenue on most of the expressways in Japan. The Hanshin Expressway Corporation owns a dozen expressways in the Kansai region including the Wangan Expressway along Osaka Bay. The Honshu-Shikoku Bridge Expressway Company owns three expressways that connect Honshu to Shikoku. This includes the westernmost Nishi-Seto Expressway (National Highway 317). The expressway is 46.6 km long and includes nine long-span bridges that connect seven islands. We looked at the Ohmishima Bridge on the Nishi-Seto-Expressway two days ago. Just north is the Tatara Bridge, which had the longest main span (890 m) of any cable-stayed bridge when it was built in 1999. We also studied this bridge before (on February 8, 2009).

It crosses over the Tatara Strait between Ikuchijima and Ohmishima Islands. It was originally planned to be a suspension bridge, but advances in cable-stayed technology eventually made this bridge a more economical and environmentally friendly alternative. It took nine years, from August 1990 to May 1999, for the Tatara Bridge to be built.

I'm researching this bridge for a school project,thanks for the helpful info!