I thought that this week we would concentrate on views from the deck of the Ryogoku Bridge. A popular theme for Japanese woodblock prints is people congregating along a bridge railing to enjoy the evening breeze. The print above, by Kitagawa Utamaro from 1796, shows his specialty of 'bijou okubi-e,' beautiful women with large heads, in this case leaning against the railing of the Ryogoku Bridge and engaged in conversation.

A triptych by another popular ukioy-e artist, Ando Hiroshige shows another favorite theme, people enjoying the view at sunset. This print is one of 'Eight Views of Famous Places in Edo' from 1847. We've seen other 'evening glow' prints in previous blogs. 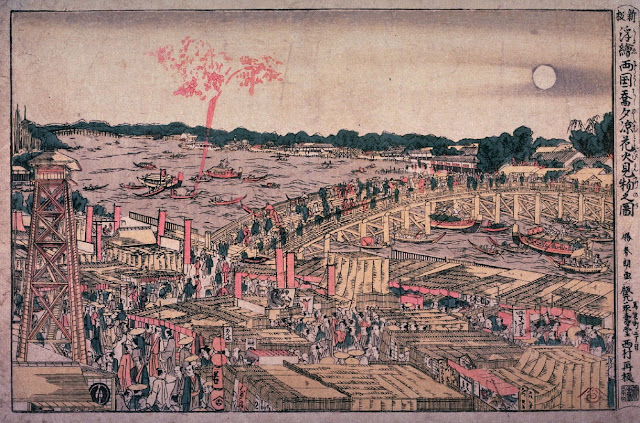 Two other themes that are popular in Japanese woodblock prints are scenes with fireworks and scenes with moonlight. These two themes are shown together in the print above by Hokusai from 1790. 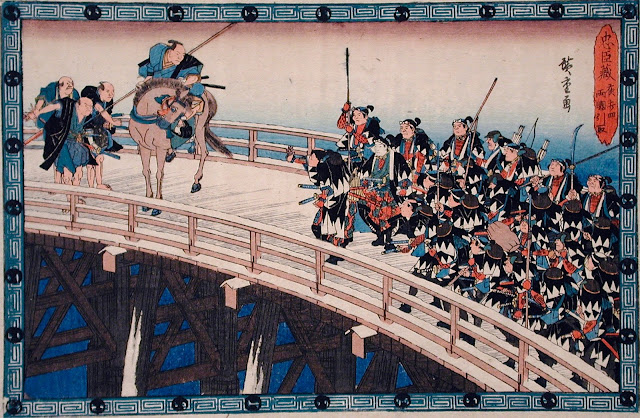 An emissary of the emperor was insulted by an official at the court of the Tokugawa Shogunate. Losing his temper, the emissary drew his sword and scratched the forehead of the official as a sign of his displeasure. The drawing of a katana was forbidden in court and so he was ordered to commit seppuku, all his property was confiscated, and his samurai became homeless ronin. Being loyal to their master the 47 ronin carefully developed a plan and several years later killed the official. The woodblock above (by Hiroshige) and below (by Kuniyoshi) show the Ronin being stopped by another official on the deck of the Ryogoku Bridge after the murder.

In the 18th century the Ryogoku Bridge carried an important road between Edo and Kyoto (ryogoku means 'two nations'). The ronin were ordered to take the Eitai Bridge to Fukagawa instead, where they wouldn't be hassled. The story of the 47 Ronin is called the 'Chushingura,' and is one of the most popular stories in Japan.