Here are a couple of final photos of the Saone and Rhone Rivers. As I've mentioned before, the City of Lyon is on two hills with two rivers lying between them. In the photo above, I'm standing on Fourvier Hill above the Saone River and we can just see the previously studied Passerelle du Palais de Justice below. Also note that Lyon only has three or four skyscrapers. 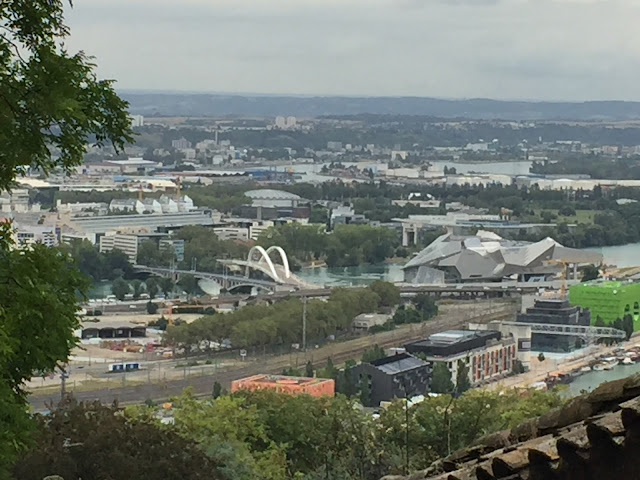 In the photo above, I'm further south on Fourvier Hill looking down at Pont Pasteur and Passerelle de la Paix by the confluence of the Saone and the Rhone. In the distance we see the beginning of the Alps. On the other side of Fouvier Hill (behind me) is the Massif Central (an extinct volcano range) making Lyon a low area of rivers, roads, and rails.

Most of the river crossings in Lyon were destroyed by the retreating German Army while no bridges in Paris were destroyed (General Choltitz reportedly disobeyed an order to destroy Paris before the Allies entered the city).  Only three bridges across the Saone survived WWII intact (the Viaduc Saint Irenee, the Passerelle Saint Vincent Bridge, and the Passerelle de l'Homme de la Roche (which was defended by resistance fighters).