The photo above was taken 16 years ago of the new (gray) Badger Street Lift Railroad Bridge next to the old (green) Schuyler Heim Lift Bridge. Today, a new Schuyler Heim Bridge is being built and will be completed by the end of 2016 (see photo below).  The Ports were concerned that none of the bridges that carry vehicles on and off Terminal Island were designed to stay in service for the design earthquake. To address this concern, the new Schuyler Heim was allocated an additional 10% for an enhanced seismic design. Caltrans feels confident that all three bridges have a robust seismic design that should keep the highway bridges in service following a large earthquake. The two Ports handle 40% of the goods that move in and out of the U.S. so it's important to minimize disruptions to the transportation system. The Alameda Corridor allows trains to move from the Ports through Los Angeles without any at-grade crossings. Also, a new switching yard is being built next the Ports. With the new Schuyler Heim Bridge, truck traffic should also be able to move into and out of the Ports without disruptions. 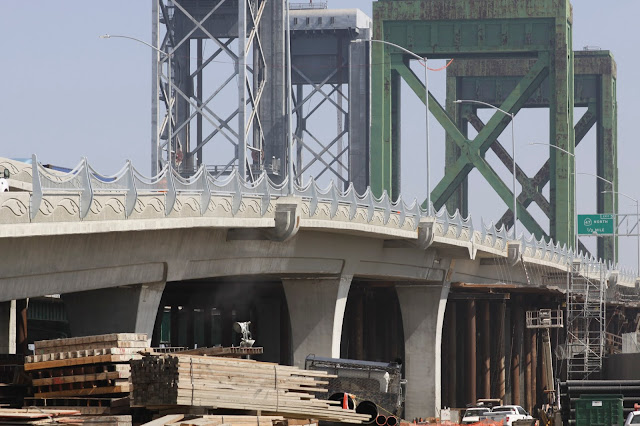 Los Angeles County, California Bridges: Schuyler Heim Bridges across the Back Channel in San Pedro Bay by Mark Yashinsky is licensed under a Creative Commons Attribution-NonCommercial-NoDerivatives 4.0 International License.
Posted by Mark Yashinsky at 9:00 AM