A couple of final photos showing the substructure of the Mount Murphy Road Bridge. The use of reinforced concrete was quite popular, even for the substructure of a steel truss bridge at the beginning of the 20th century. Note the nicely pointed edges of the hexagonal pier walls and the other architectural embellishments in the photo above. Also, we can see a pipe (probably to bring water to neighborhoods on the east side of the river) carried by the bridge.

In the photo below we can see the outline of the skinny formwork used to cast the approach spans, the abutment, and the retaining walls on the west end of the bridge. Note the depth of the deck increases at the support to handle the larger moment and shear.

Trees, rocks, slabs of concrete, etc. are scattered around the abutment in a jumble. Apparently, no one has attempted to landscape this bridge. Considering the history of the bridge and of Coloma I'm surprised that more of an effort hasn't been done to beautify the area around the bridge. Probably the frequent winter flooding has created such a mess around the piers and abutments that they finally gave up on beautifying the bridge site. 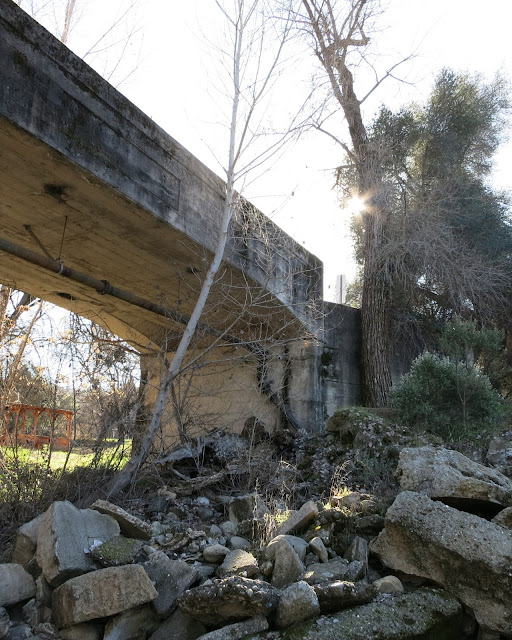 El Dorado County, California Bridges: Mount Murphy Road Bridge across the South Fork of the American River (5) by Mark Yashinsky is licensed under a Creative Commons Attribution-NonCommercial-ShareAlike 3.0 United States License.
Posted by Mark Yashinsky at 9:00 AM