Continuing upstream along the South Fork of the American River to the town of Coloma where the California Gold Rush began. My son and I arrived on a Saturday afternoon but the town was empty except for the many people dressed in 19th Century garb. I recalled 15 years ago when my son's class had traveled to Coloma to relive the history of the Gold Rush (they spent another day at Sutter's Fort in Sacramento).

Near the center of town is the Mount Murphy Road Bridge (just west of Mount Murphy as shown in the Google earth photo below). It is a 489 ft long bridge with a 162 ft long Pratt truss center span and with reinforced concrete through girder side spans. This bridge was built in 1915 and is just the latest of many bridges built near this site that were eventually swept away by winter floods. 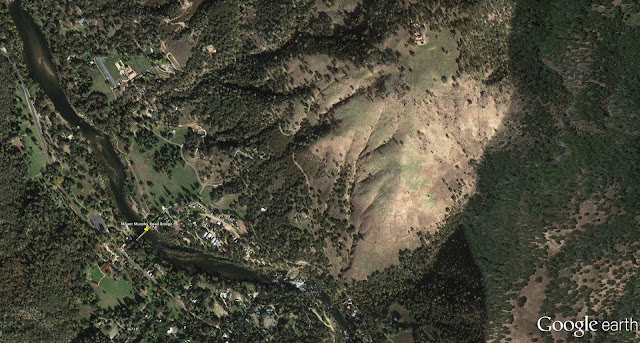 In 1849, Jim Stephens built a footbridge with a 25 cent toll a little upstream of this site. In 1850 John Little and Edward Raun built a wagon toll bridge that earned $20,000 in just three months. California's first covered bridge was built at this site in 1852. A pedestrian suspension bridge was at this site from 1881 until it was replaced by the current bridge. I imagine each bridge was built a little higher above the river resulting in the current bridge surviving for almost 100 years.

We'll take a closer look at the bridge tomorrow.

El Dorado County, California Bridges: Mount Murphy Road Bridge across the South Fork of the American River (1) by Mark Yashinsky is licensed under a Creative Commons Attribution-NonCommercial-ShareAlike 3.0 United States License.
Posted by Mark Yashinsky at 9:00 AM